The Olive Tree and the Grafted Branch – Jews and Christians 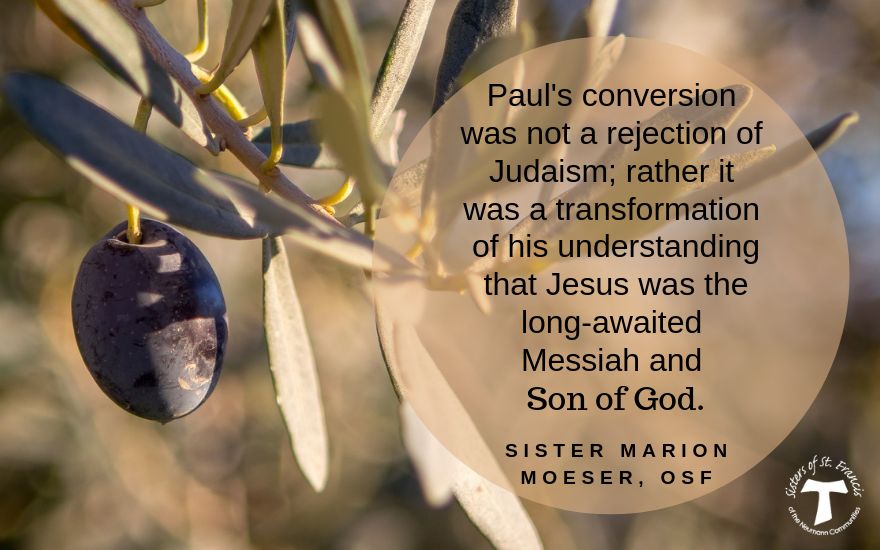 Two events, one recent and one upcoming, prompt this reflection. On Oct. 12, 2018, eleven Jews in the Tree of Life Synagogue in Pittsburgh were murdered as they gathered for Sabbath services. This evil was met with a righteous outcry from almost all Americans, and rightly so. On Jan. 25, we Christians celebrate the Conversion of St. Paul. One can ask what Paul’s thoughts would be on the radical anti-Semitism that took place in a synagogue named “The Tree of Life?”

Paul’s conversion was not a rejection of Judaism; rather it was a transformation of his understanding that Jesus was the long-awaited Messiah and Son of God. Paul was persecuting the early Christian Jews, but as he himself recounts, he was gifted with a revelation of Jesus Christ “in order that I might preach him among the Gentiles” (Galatians 1:15-16). The Acts of the Apostles, Chapter 9, gives more details: Paul’s journey to Damascus, a sudden light that blinded him, and the voice identifying himself as Jesus.
Paul accepted his calling to preach among the Gentiles, but in his letter to the Romans, he spoke proudly of his own life as a Jew (11:1). He never rejected those among his people who could not accept Jesus; however, he struggled with their rejection with “great sorrow and constant anguish in my heart” (9:3).

Paul asks about God’s relationship with the Jews in Chapters 9-11 of Romans: “Has God rejected his people?” The question is answered with a strong phrase, “By no means!” (11:1) Paul hopes that he can bring all Gentiles to believe in Jesus and then the Jews will be jealous and accept Jesus. We know that the Jews are not totally rejected because of Paul’s assertion that theirs is “the sonship, the glory, the covenants, the giving of the law, and the promises” (9:4). Paul says the Jews are beloved because “the gifts and the call are irrevocable” (11:29). One of the gifts is the covenant.

Paul warns the Gentile Christians not to be proud. Beginning with, “if the root is holy so are the branches,” Paul uses the image of an olive tree (Judaism) onto which a wild olive branch (Gentile Christians) has been grafted to warn “it is not you that support the root, but the root that supports you” (11:18). Paul ends his struggle over the mystery of the situation with: “Oh, the depth of the riches and wisdom and knowledge of God! How inscrutable are his judgments and how unsearchable his ways” (11:33).

In Roman Catholic teaching today, St. John Paul II presented the concept that the covenant with the Jewish people has not been revoked during a synagogue in Mainz, Germany in 1980 when he addressed a German Rabbinical Conference. Several recent Church documents including The Joy of the Gospel by Pope Francis also show that the belief that God’s covenant with the Jewish people has never been revoked. Christian theologians themselves struggle with this mystery since the New Testament speaks of the “new covenant” in Christ. Nevertheless, Paul speaks of the Jewish covenant as irrevocable. How unsearchable are God’s ways!

Even though Paul used the image of an olive tree and not the Tree of Life from Genesis, one cannot help but reflect on Paul’s words when considering the action at the Tree of Life Synagogue. Christian outrage at this incident and all anti-Semitism is well placed. The murderous actions and words strike at our very roots. We Christians are “the grafted ones.”