Menu
News & Events
> The Mystery in the Archives

The Mystery in the Archives 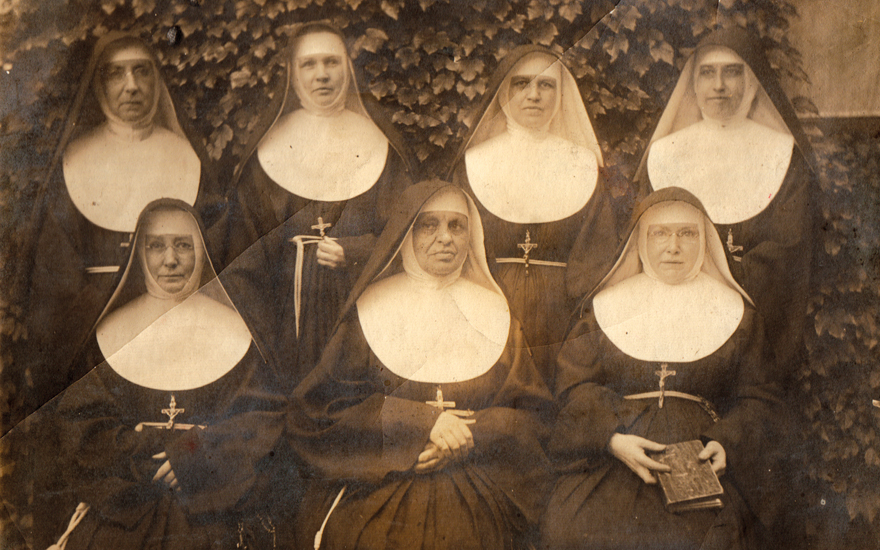 The primary role of an archivist is to review documents past and present and determine which need preserving so that the story of a person, organization or religious order can be accurately told. Occasionally, that means the archivist has to play detective and track down the origin of a record or photo.

Such was the case for Archivist Charlene Martin and Sister Maria Salerno, assistant archivist for the Sisters of St. Francis of the Neumann Communities. The photo at the right had remained for decades in the archives office, undated and indexed only as “groups of sisters.” Scribbles on the photograph identified the sisters as Sister Norberta, Sister Fulgentia, Sister Christina, Mother Bernardina, Sister Alphonsa, and the two daughters of Mother Mary Francis Bachmann. To re-index the photo by more specific criteria, the archivists needed to solve the mystery of when and why did these sisters gather together? It must have been a momentous occasion, Charlene reasoned, but when, where and what was it?

Because most of the sisters in the photo came from the congregation’s western New York region, Charlene turned to Sister Mary Dolores Cook, the western New York region archivist. Sister Mary Dolores provided ministry lists for each of the sisters named in the photo. Charlene looked to see if the sisters shared a ministry location at a certain date. While she didn’t find a common link, Sister Maria did come across a clue – a notation in Sister Robertine Bachmann’s biography that on March 19, 1902, the son of one of our community’s founders, Mother Mary Francis Bachmann, celebrated the first Mass at St. Francis Home in Gardenville, New York (now West Seneca). Reverend Alphonse Bachmann’s sisters, Sisters Robertine and Mary Francis Bachmann, sang the High Mass and Mother Bernardina Dorn, another of our congregation’s three foundresses, traveled from Syracuse to attend. Charlene and Sister Maria wondered –could this be the occasion that the photograph captured? A letter in the archives of the Syracuse community seemed to confirm her theory – “Your visit, though it was short, we will not forget,” Sister Maria Laurentia of Gardenville wrote to Mother Bernardina on Sept. 20, 1902.

“While it was fun to unravel, mysteries like these can be avoided,” Charlene said. “When donating your photos to the congregational archives, just include some information such as who, when, where and why.” She doesn’t recommend writing on the back of the photo, however, as ink or pressure from the pen or pencil damages the photo. “We’re always very grateful for thinking of us when you consider a permanent home for any materials you have that are related to the Sisters of St. Francis,” she says.

Special thanks to Sister Dolores Cook for generously sharing her time and resources from the Williamsville Archive, to Sister Fran Gangloff for her assistance and the informative “Canticle of Welcome,” and for Archival Assistant Sister Maria Salerno’s tireless efforts in researching a hunch.

PreviousServant Leadership: Serving Others with God’s Help
NextFranciscan Spirit – A Day in the Life of a Franciscan Sister, Winter 2017