The Day I Lost My Sole 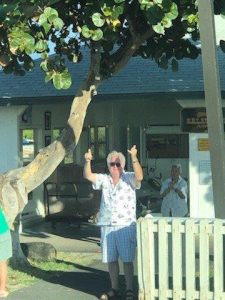 It all started in the morning of April 4 when I went to Kalaupapa International Airport to meet a planeload of young men and women arriving on Saints Damien and Marianne land for a few days of retreat away from the business of Honolulu’s everyday life. Their demeanors were calm and reflective as they stepped off the plane, befitting the purpose of their visit. That would change somewhat as soon as they hit the town. Later that morning Meli and I returned to the airport, accompanied by two of the young men to collect the cargo of food they would consume in the next few days. It was quite evident by the shipment that these young Christians had not come to fast….at least from food anyway. Of course, fasting takes many other forms.

The morning of the second day, they descended on St. Francis Church, armed with brooms, dust cloths, mops, and their youthful energy. They went to work immediately (well almost immediately) dusting, sweeping and washing the interior of our church as it seldom has been done before. They expended much energy in their efforts and shed a lot of sweat in the process. I was in my house when two of the young men suddenly burst through the door, wearing masks. Initially, I thought that they had come to fumigate me but, as I discovered, they had come to clean the moldy walls of my bathroom. After they had completed wiping and scrubbing, they emerged unscathed by the chemicals they used and began cleaning the walls of the living room where the paint was peeling off, like the whitewash on the walls of an Irish cottage, or some low quality breakfast corn flakes. These walls are not very appealing.

The third day dawned bright, sunny and quite warm. But instead of swim time, it was time for more service work. So, we hit the rocky road to Kalawao (it hit back!) and made our way to St. Philomena, the church St. Damien built. Led by Meli, the young ladies swept, dusted and mopped the floor from door to door, while the young men joined me in the graveyard outside to clean up the graves. It was then that it happened. As I flexed whatever muscles I have left, I felt a pull on my right foot. Looking down, I saw the sole of my long-serving right shoe flapping from toe to heel like the wing of a silly goose. These shoes came with me to Kalaupapa 6 years, nine months and six days prior to this day. They carried me to the Kauhako crater several times. Now no string or ribbon could save my sole, and by the time we had finished our work, it had departed from my shoe. It had given its all in service. Its job was complete.