The Cross on Kauhako Crater 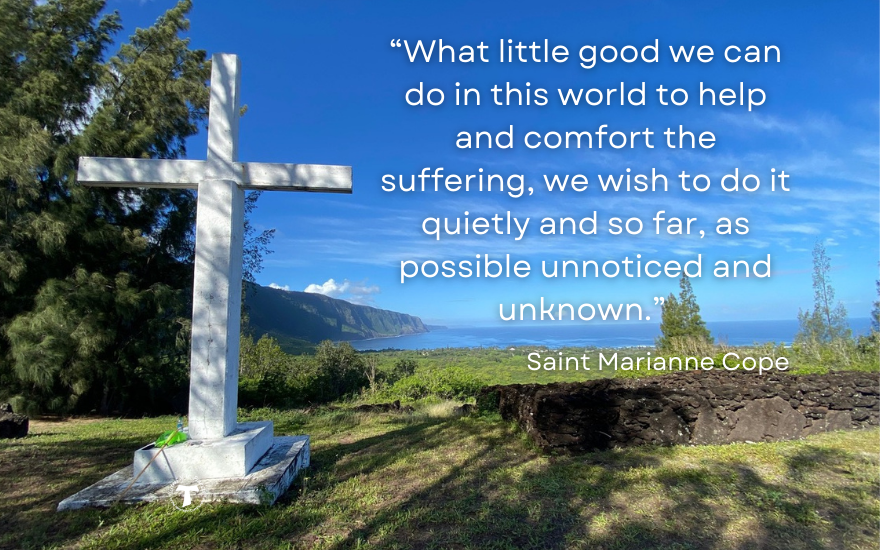 Last week we took a walk up to Kauhako Crater here in Kalaupapa. On the top of the crater is a cross. Why is it there, who erected it, what does it symbolize? A cross is a universal symbol of Christianity; this plain design carries the message of love, finality, fulfilled promises, and more to people around the world. 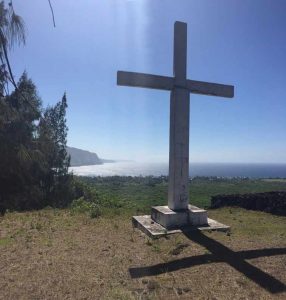 This particular cross gives a special message to all of the people of Kalawao and Kalaupapa. No matter which denomination, religion was and still is especially important to the remaining patients. Throughout the years, Father Damien, Mother Marianne, the Roman Catholic Church, the Church of the Latter-Day Saints, the Buddhist, the Calvinist, and the United Church of Christ gave them love and the hope to survive. Sister Leopoldina’s journal has multiple examples of sadness, hopelessness, and despair. However, Mother Marianne always gave her sisters and girls a sense of hope. She said, “What little good we can do in this world to help and comfort the suffering, we wish to do it quietly and so far, as possible unnoticed and unknown.” and “May God give you health and strength so that we will be able to lead the little ones to Him and teach them to love God more than anything in this world.”

The plaque at the base of the cross reads: “Love Never Faileth.”  An article by Valerie Monson, then a writer for the Maui News, tells this story:  Henry Hori was sent to Kalaupapa in the 1940s later, he was diagnosed having kidney disease and was on his death bed. A dedicated Protestant and a child of God was in the hospital with a grim prognosis. The miracle drugs had just arrived in Kalaupapa, but it was too late for Henry. The Doctor said to his close friends that they needed “to get his burial clothes ready.”

So that night, Henry clung to one final hope; he closed his eyes and prayed like he never prayed before. “Dear God, please make me well and I will build you a cross. I will build you the biggest cross you could ever imagine.” Yes, the good Lord heard Henry and cured him. His friend, Kato, said that “it was like a miracle.” Yes, he survived the night and was released from the hospital as he regained total health.

As a carpenter, he knew how he wanted to build the cross. Everyone in the settlement knew that there was only one location – by the ironwood trees at the top of the Kauhako Crater; it was built in 1948. However, when the wooden cross was erected, the first strong wind blew it down. So they put up a second one and the wind blew it down again. Since the wooden cross was no match for the wind, the Lions Club erected a cement cross in its place. The 20-foot monument with its 12-foot crossbar was completed in 1956. For years, sunrise services were held for the Kalaupapa congregations; they made it up the steep slope.

Henry Hori died three years after the cross was erected. “His gift to God is a reminder for all in Kalaupapa, a constant reminder of resurrection and hope in a place where dead once ruled.” (Monson)

As we begin the season of Lent, reflect on what the cross means to you.