Below is an account of an incident the Sisters at the Bishop Home encountered during Mother Marianne’s time. We shared it with the students of Imi Ho’ola during the presentation on holistic healing: humor, amusement, laughter as healing. It is told from Denis’ viewpoint. In the starkness, suffering and desolation of Kalaupapa, Mother Marianne and the Sisters were glad for anything amusing, humorous or light-hearted. Sister Leopoldina shared the memory of Denis entering the convent. Mother’s reaction provided amusement and laughter that lingered well beyond the time it took to get the mud cleaned up and the “perfume”/odor to disperse.

The Day I Entered the Convent

Hi. My name is Denis, the Pig. I’ve been on these grounds for years and watched, just lately, the building of cottages and the main house. Heard the name—Bish 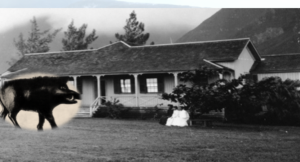 op Home Complex. No mind what it’s called, as long as they stay away from my favorite spot: the muddy area not too far from the houses. Since the arrival of the girls and Sisters, my diet has been expanded to include table and cooking scraps from the kitchen. Nobody bothers me as I roll in the mud, lay around in the sun and, in general, enjoy life.

It takes much energy to be curious, and I’m not the curious type, but feeding time rose to a new level when the Sisters came to live in the convent. So, one day I decided to find where the good stuff was coming from. The sun was already up, about 9 am in the morning, and I had just enjoyed a mud bath, a wet one, from the earlier rain. The door to the main house had been left ajar, an obvious invitation to come inside. Up the few steps I went, and down the corridor with doors on each side. The hall was a little wider than myself, so I ended up bumping into the walls. My feet made quite a noise on the wooden flooring, not like walking in the soft dirt. I headed down the hall toward the smell of food when…A DOOR OPENED…and I was face-to-face [in a manner of speaking] with Mother Marianne. She didn’t look too happy and she wasn’t her usual calm, sweet self. I had never seen her so wildly agitated. I knew she meant business when she came out of her room and charged toward me with a big something in her hand. I wasn’t about to stick around to find out what she planned on doing with it. Departure from the house was many times faster than the slow, lumbering entry. That was the first and last time I went into the convent. “Mi casa es su casa” apparently didn’t apply here. I continued my life of Riley outdoors. 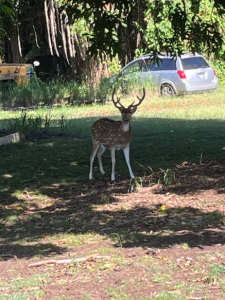 To observe the Kalaupapa Settlement today, one would think that we humans had encroached upon the “Home Sweet Home” of the atlas deer. It is nothing to come up the driveway of the Bishop Home and have a herd of 20-30 deer stop their munching and look at you as your car passes, as if to say…whatever deer say. They have not entered our convent, but they leave their calling cards everywhere whether you see them or not. On the sidewalk to our garbage pick-up area, on the lawn, on our driveway, in front of the Kalaupapa Store, on Mother’s gravesite…everywhere. For those with undiscerning eyes, the scat looks like tiny, edible, dark berries. Things are not always what they appear to be……