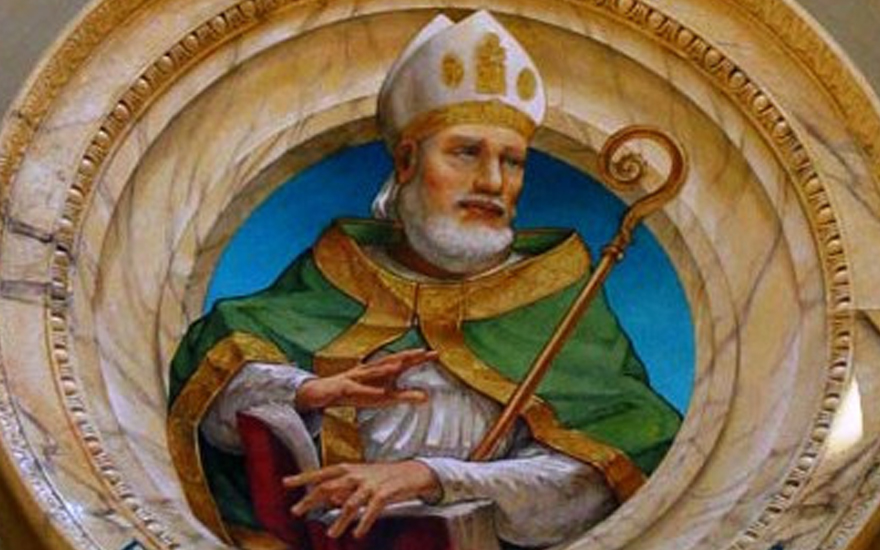 One legend tells how the father of baby Ambrose found bees on the infant’s face and a drop of honey on the baby’s tongue. Later in his life, Ambrose’s preaching gave him the title of “honey-tongued doctor” and so bees and beehives became a symbol for him. Ambrose was one of the four original men named as doctors of the church.

Named Aurelius Ambrosius, the baby was born in Trier into a Roman Christian family and given the same name as his father. Trier was an outpost of Rome and has many Roman architectural features, including bridges, towers, aqueducts, and an amphitheater.

Ambrose studied in Rome, pursuing knowledge in literature, law, and rhetoric. He then followed his father’s career as councilor and governor.

In Milan, in the 370s, Bishop Auxentius favored the view of the Arians who denied that Jesus was both divine and human. At the time of that bishop’s death, Ambrose ruled the city of Milan as governor. When arguments between Arians and Christians led to rioting in the cathedral, Ambrose did not take either side of the argument, but pleaded for peace. That led to cries of “Ambrose for bishop! Ambrose for bishop!”

To be a bishop in those times of heresy and fighting over doctrines meant facing dangerous, and often life-threatening situations.

Ambrose was 33 years old and not yet baptized (as that was an adult decision in those days). He ran away and hid. Forced by the emperor to become bishop of Milan, Ambrose donated his goods to the poor and began to study theology and Scripture. He received baptism and ordination as a priest and then consecration as a bishop for Milan. His training as a lawyer and orator helped him fight heresy, especially the Arian heresy.

Those who knew Ambrose noted his preference for the poor. They saw how he used any power he had for the sake of the poor. During the invasion of the Goths, he ransomed hostages and captives.

Always opposed to violence, Ambrose refused to use force, even to save the basilica from imperial troops. With the people inside the besieged basilica, Ambrose led the groups on either side of the main aisle to alternate singing hymns that he had composed. Soon the soldiers outside began to sing. This historical fact comes down to us as the first record of communal singing. The siege on the basilica melted away.

Ambrose used his sense of reconciliation to quell invasions of the empire and to assist people to safety when their lives met with threats, including Empress Justina and her son.

Augustine of Hippo disliked preachers, but he took favorable notice of Ambrose. It was Ambrose who converted and baptized Augustine.

We observe the feast of Ambrose on December 7, the day of his ordination. His body lies in the Church of S. Ambrogio in Milan.

Photo: St. Ambrose in the church at Our Lady of Guadalupe Shrine near LaCrosse, Wisconsin. Photo taken by John Gangloff