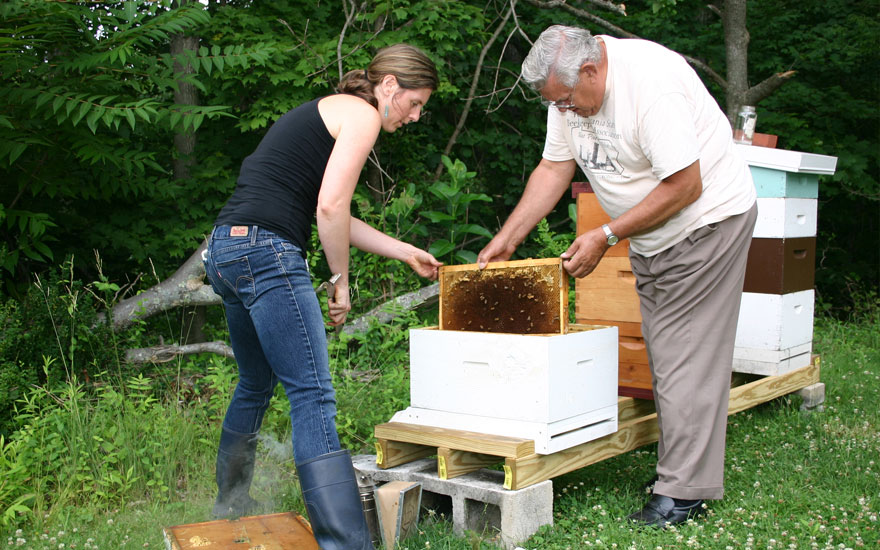 Sisters of St. Francis of the Neumann Communities welcome bees onto campus in an effort to protect and preserve the earth.

The bees have found a home atop Mount Alvernia in Millvale, Pennsylvania. On Tuesday, June 23 sisters along with staff and friends from the beekeeping community welcomed and blessed three hives of honey bees. The hives were recently installed on the sisters’ campus by local beekeeper and local television morning news anchor, Michelle Wright.

The addition of the beehives is a congregational response to Pope Francis’ encyclical on the environment which was released Thursday, June 18. As followers of St. Francis of Assisi, the patron saint of the environment, the sisters have a long standing commitment to protect and preserve the Earth.

During the prayer service, Sister Donna Zwigart blessed the bees and beehives with holy water using a branch from the Eastern Hemlock, the state tree of Pennsylvania. Together, the group prayed St. Francis’ praise for mother earth and took the St. Francis Pledge to pray, act and advocate for the care of creation and the poor.

Wright, who has been a beekeeper for about two years, says after driving by the Mount Alvernia campus on her daily commute to and from work, she thought it would be the perfect location for a new set of beehives. With the release of the Pope’s encyclical, she was eager to collaborate with the sisters on the project.“It’s something small, but very important we can do to help the environment,” she says.

“Bees play an important role in pollinating flowering plants, including fruits and vegetables, and we know that honeybees have been disappearing,” says Cheryl Aughton, director of communications. “We are happy to provide these bees with a spot where we pray they will flourish.”

Honeybees pollinate more than one-third of the fruits and vegetables we eat. Since 2006, bees have been experiencing an alarming yearly decline of 35 percent. Scientists call this Colony Collapse Disorder.

“We are called to creatively care for and reverse the damage that has been done to God’s creation,” Aughton said. “We’re trying to bring new life to mother earth by allowing God to work in all things, and in us.”

Read the story at triblive.com.