Sisters of St. Francis of the Neumann Communities Troubled by Climate Agreement Withdrawal 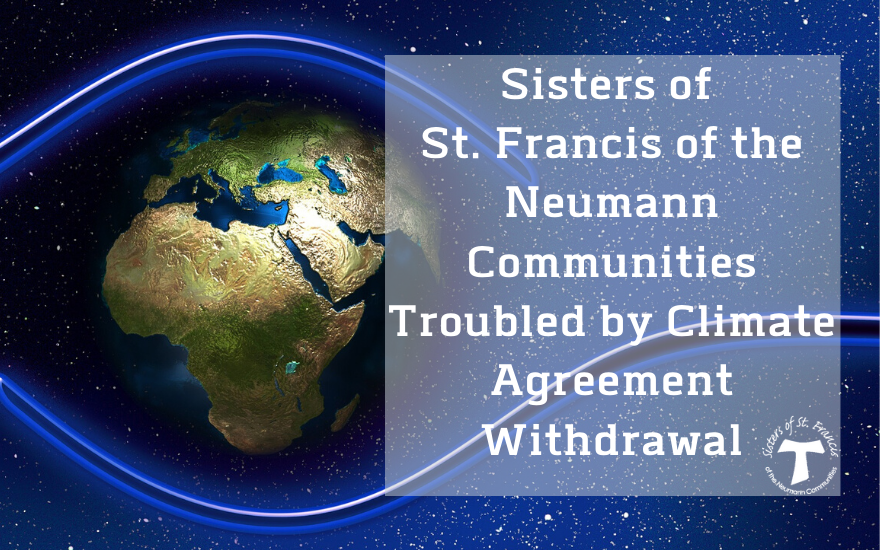 The more than 320 Sisters of St. Francis of the Neumann Communities joined the Leadership Conference of Women Religious (LCWR) in expressing their deep disappointment in President Trump’s actions this week to withdraw the United States from the Paris Climate Agreement.

“As followers of St. Francis of Assisi, we are especially committed to preserving the incredible gift from God that is the earth and her many resources,” said Sister Louise Alff, head of the congregation’s Peace and Justice Committee and a member of the Leadership Council. “Even as the President was following through with his promise to leave the climate agreement, 11,000 world scientists declared a climate emergency.”

LCWR also stated that its members were “profoundly troubled by the decision to formally request US withdrawal from this critically important international agreement.” The sisters and LCWR point out Catholic teaching that calls climate change “a grave moral issue that threatens our commitment to: protect human life and dignity, exercise a preferential option for the most vulnerable, promote the common good, and care for God’s creation.”

The Agreement, signed by more than 200 countries, called for the reduction in carbon emissions as a means of keeping global temperature increases under 3.6 degrees Fahrenheit. President Trump said in 2017 he would withdraw, stating that the agreement would kill jobs and impose harmful regulations on the U.S. economy.

The Sisters of St. Francis and LCWR pledge to continue to speak out against climate policies that harm the Earth and the world’s most vulnerable populations and promise to persist in advocating for climate justice.

The Sisters of St. Francis of the Neumann Communities is a congregation of more than 320 vowed women religious ministering in 12 states, Lima, Peru and Timau, Kenya, South Africa. The Sisters have region houses in Syracuse, Williamsville and Mount Vernon, New York; Pittsburgh, Pennsylvania; and Honolulu, Hawaii.

LCWR is an association of leaders of congregations of Catholic women religious in the United States. The conference has nearly 1300 members, who represent more than 38,800 women religious in the United States. Founded in 1956, LCWR assists its members to collaboratively carry out their service of leadership to further the mission of the Gospel in today’s world.

PreviousAt Age 95, She Fights Online Pornography
NextIn Praise and Gratitude to all our Benefactors