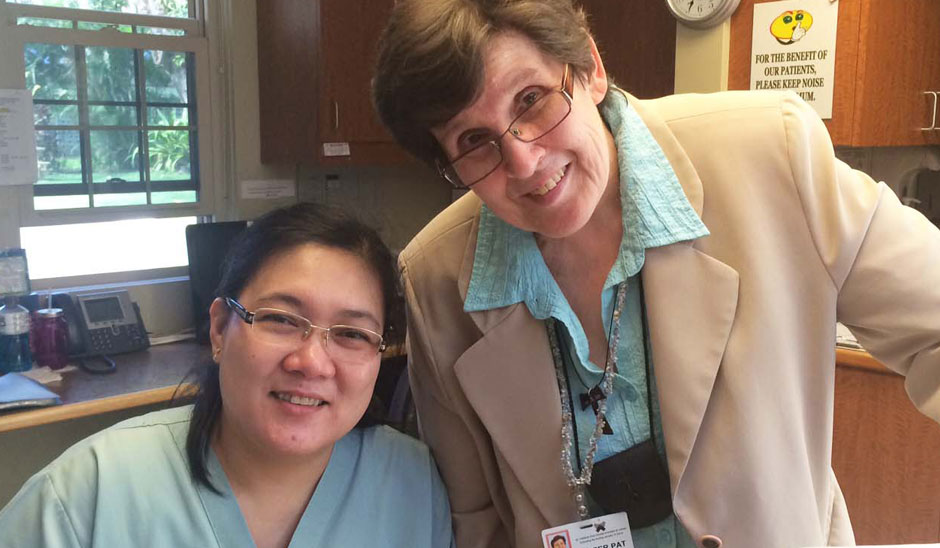 The woman affectionately called “Sister Mom” by both family and friends took a roundabout path to become a Sister of St. Francis of the Neumann Communities. But Sister Patricia says God was preparing her for this destination throughout her life’s journey.

Patricia says God first called her to religious life when she was just eight years old and a third grader in Utica, New York. When she turned 16, Patricia volunteered her time at St. Elizabeth’s Hospital in Utica, where she delivered newspapers and visited with patients. Here, she met many members of the Sisters of St. Francis of the Neumann Communities, and walked in the footsteps of St. Marianne Cope, the Franciscan sister who had founded the hospital more than a century earlier.

At age 17, Patricia entered the Daughters of Charity in Emmitsburg, Maryland. Yet, her time with the sisters was short-lived. “What I didn’t know at 17 was why I needed to be in the world, but not of it,” explains Sister Patricia. “I told the Lord I’d be back, although my return took a long time, God certainly made sure I did [come back].”

She went on to marry and raise her family, modeling her ability to love and support her children unconditionally after God’s unconditional love for her. “My love for them enabled me to give them the freedom to grow and find out who they are,” she says. “Now that they are older, they thank me for this.”

In 1997, Patricia realized her dream of becoming a Catholic sister was still within reach. She was part of the Franciscans in Action volunteer service program, working with the elderly and disadvantaged in David, Kentucky when she met a woman who had formerly been married, and presently was in religious formation, the process of preparing for taking religious vows.

So in 1998, after teaching for 30 years in the Utica public school system, raising her children, saving money to pay for her youngest daughter’s college tuition, and paying off all of her bills, Patricia entered the Sisters of St. Francis of the Neumann Communities at the age of 53. She gave most of her material possessions to her children and presented them with gifts of money for her future grandchildren. “My children were happy for me and knew this was where I belonged,” she says.

While in formation, she began serving as pastoral minister at St. Joseph’s Hospital Health System in Syracuse, New York, a sponsored ministry of the Sisters of St. Francis. In addition, she attended the Franciscan Church of the Assumption in Syracuse where Mother Marianne professed her final vows.

Then in 2004 with all of her children by her side, Patricia professed her final vows. Each child had a unique role in the ceremony, and both her parents and in-laws were in attendance.

Two years later, God called Sister Patricia to serve in Honolulu, Hawaii. Like Mother Marianne who responded to God’s call to care for those who were outcasts in Hawaii more than a century ago, Sister Patricia said “yes.”

Today, as a chaplain ministering to the sick and dying at St. Francis Hospice “I minister to the outcast of society as well as those who are very vulnerable because of sickness during their life’s final journey,” she says. “As a mom and a sister, I bring compassion to others and advocate for them,” she says.

Sister Patricia says the sum of her life experiences have given her a unique ability to empathize with others. “I have been through divorce, getting annulments and I had a brother die of AIDS, which helps me to personally relate to people who are going through these things themselves,” she says.

With her children living across the U.S., Sister Patricia uses social media to keep in touch. In 2009, her daughter and sister visited her to help her celebrate her success after earning a master’s degree in pastoral theology.

Sister Patricia also serves as regional director for the Franciscan Associate program and is part of the congregation’s vocations team. “To be a Franciscan sister is to be in relationship with all creation and to bring God’s love and the Franciscan spirit to all I encounter,” she says.

“Becoming a mother makes you the mother of all children. From now on each wounded, abandoned, frightened child is yours. … You long to comfort all who are desolate.” – Charlotte Gray

“Sister-Mom” Patricia Schofield was featured in a Mother’s Day story on KITV News in Honolulu, Hawaii.

Watch it on KITV.

Her story was featured in Woman’s Day magazine and the Hawaii Catholic Herald.