Sister Mede Ministers to Animals and Their Owners 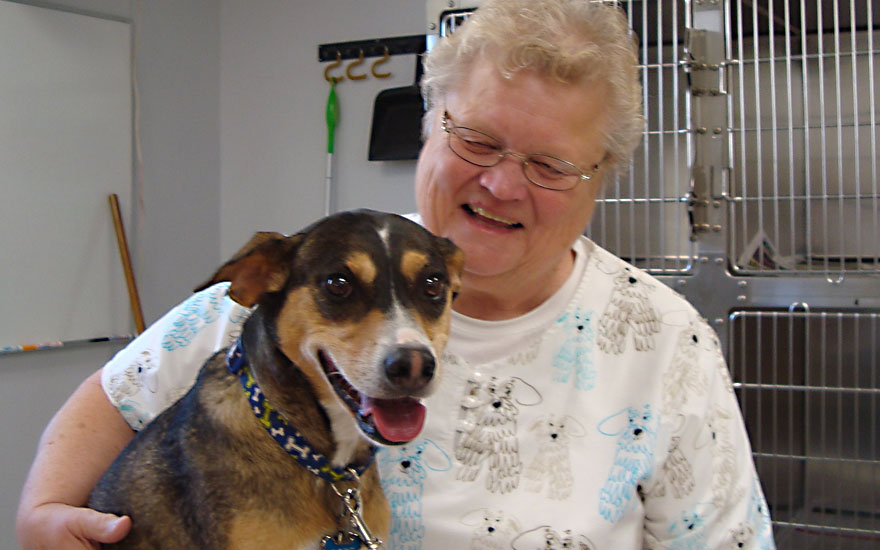 In the 53 years that she has been a Sister of St. Francis, Sister Mediatrice “Mede” Hutchinson of Syracuse, New York, has served God as a teacher, school administrator and caregiver to the elderly in both nursing homes and for her own sisters in community at the former Jolenta convent on Court Street in Syracuse, this last a particularly satisfying ministry. When the Syracuse campus closed in 2014 and the sisters moved to Franciscan Villa to be cared for by others, Sister Mede began to think of her own future options. Even at the age of 70, she gave no thought to retirement, instead opting for yet another ministry as a certified veterinary assistant.

“I’ve always had a love for animals. It seems to me just about every convent I’ve lived in we had a dog,” she said. “So I thought to myself, ‘what a great transition this would be — going from children to the elderly to creation and animals.’”

She had been back to school before, to earn a master’s degree in gerontology, so Sister Mede wasn’t daunted by the educational challenge. She took courses online and studied at home, speaking frequently with her counselor by phone and working an externship with the veterinarian who treats her own dogs. “The study part was so interesting that it wasn’t difficult,” she says. She immediately began applying for jobs and eventually took a part-time position with a practice on Syracuse’s Northeast side.

She sees working with animals as a clear expression of her Franciscanism. “When I first started, people would say ‘Oh, you’re a sister.’ And I would say ‘Yes, I’m a Franciscan.’ And they would respond, ‘Oh, well that works.’ It’s like stepping out with St. Francis and looking at creation as a whole,” she says. And it provides a new opportunity to minister to people.

“Just last Saturday I walked out into the reception area and there was one of the clients with her little dog. She came up and said ‘Oh sister, I’m so glad you’re working today. I just need a hug.’ It was so beautiful, really,” she says. “And Friday, I was with a couple who had to say goodbye to their cat. I stayed with the woman the entire time … It’s an opportunity to step out of the (traditional) role of the Catholic sister and still be a minister to people. It’s absolutely perfect to look at that and see you can minister but not have to be in a church ministry.”
Working at the reception desk offers Sister Mede the opportunity to get to know the practice’s clients in a friendly, relaxed atmosphere. “The clients share their whole lives with you. It’s not just about their pet. You find out more about the people and they’re relaxed,” she says. Working with the animals “is always a challenge. You have to be on your feet the whole time; you’re wrestling dogs, and cats are trying to bite you. I think I’ve been bitten twice and scratched a couple of times. Not because the animals are aggressive; they’re frightened, poor things.” But Sister Mede would have it no other way.

“It’s a different venue than I’ve ever experienced, but you know, in the last few months that I have worked, it’s been a blessing. I realize that this is probably my last ministry and I can’t think of a better way to go out.”