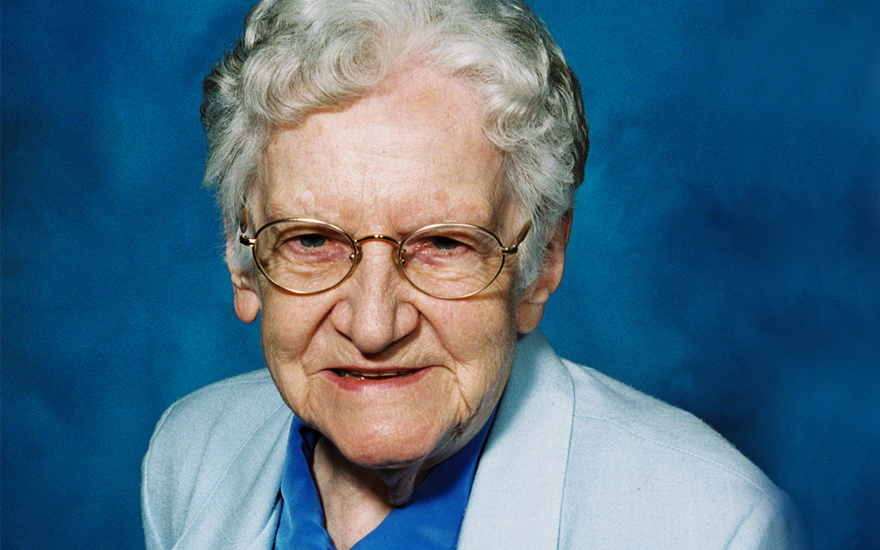 Sister Mary Louise Gerber says her secret to longevity is living a worry-free life by placing her trust in God. “Don’t take anything too seriously,” says Sister Mary Louise. “Don’t ever think it’s too much for you. You can do it.”

A Sister of St. Francis of the Neumann Communities at Mount Alvernia in Millvale, Pennsylvania, Sister Mary Louise will celebrate her 100th birthday Thursday, Aug. 6 surrounded by her family, friends and sisters in community.

The youngest of four children, Sister Mary Louise was born in Johnstown, Pennsylvania and entered the Sisters of St. Francis after having been taught by the sisters at St. Joseph’s School in Johnstown. She attended Mount Alvernia High School in Millvale and earned a master’s degree in education from Duquesne University in Pittsburgh.

After professing her final vows in 1936, she served as a teacher and principal for more than 50 years at elementary schools in the Dioceses of Pittsburgh and Johnstown. Sister Mary Louise especially enjoyed teaching children in the sixth and eighth grades. She says her greatest accomplishment was serving as principal at St. George School in Pittsburgh’s Allentown neighborhood and St. Sebastian School in Belle Vernon, Pennsylvania.

Later in her life’s journey, Sister Mary Louise served in health care ministry for 12 years at the former St. Francis Medical Center in Pittsburgh’s Lawrenceville neighborhood. Here, she offered patients care for the body, mind and spirit. “I fed them, read to them, walked with them and they enjoyed that,” she says. “I like to work with people.”

Today, Sister Mary Louise remains dedicated to helping others. She spends her days in prayer ministry with her sisters in community at Mount Alvernia. “Many people ask me to pray for them,” she says. “They have deep faith in our prayers.”

Reading and spending time outdoors are two of Sister Mary Louise’s favorite pastimes. “I love the outdoors,” she says. “I like to explore and see places I’ve never seen before.” She also enjoys taking part in various activities at Life Pittsburgh and watching the Pittsburgh Pirates.

Sister Mary Louise is in the news!