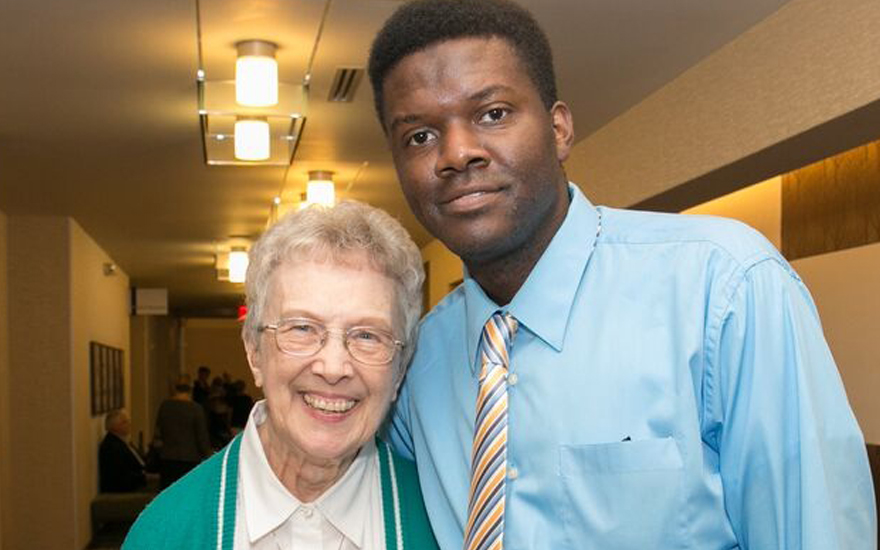 When Robert Herring first enrolled at the Greater Pittsburgh Literacy Council (GPLC) about seven years ago, he could barely read or write. But thanks to the encouragement of Sister Mary Leah Krauth, his volunteer tutor at GPLC, he has made great strides and recently published his first book! “I couldn’t put his novel down,” says Sister Mary Leah. “He has reminded me that we have much to learn from each other, and that life is full of gifts.”

On Oct. 20, Robert’s journey was featured as a student success story during the Leaders for Literacy Luncheon. Sister Mary Leah was pleased to attend the luncheon and celebrate his success. “He has come so far,” she says. “I am thrilled for him.” Sarah Bourbeau of GPLC says she is grateful for volunteers like Sister Mary Leah. “All of the work that she did with him made a huge difference,” she says. Read Robert’s success story here:

Robert Herring always dreamed that one day he would write a book. He’s always had a desire to learn and an interest in writing as a form of self-expression. So you may be surprised to know that when Robert first enrolled at Greater Pittsburgh Literacy Council, he could barely read or write. Although he had graduated from high school, Robert admits, “I could never read as well as I should. My skills were not where they needed to be.”

When Robert met his volunteer tutor, Sister Mary Leah, his determination was fueled by her experience. As a life-long teacher, Sister Mary immediately saw the spark in Robert, and encouraged his writing. Each lesson began with one question, “What could we do today that would be most helpful to you?” It wasn’t long before Sister Mary became the first person to read Robert’s written work.

Their weekly lessons soon became intensive writing sessions; Sister Mary reviewed Robert’s writing and provided feedback. Robert then revised his story based on Sister Mary’s suggestions. Many times, Sister Mary read the newest chapters aloud, while Robert listened attentively. With the encouragement of his tutor, Robert continued to write. He also set a new goal: to enroll in college.

This summer, Robert’s book, Scars of a Magician, came to life as a published work of fiction. It’s a spirited fantasy that follows the journey of a young man whose discovery of his own talents and abilities changes his world forever. Sister Mary Leah could hardly wait to hold the book in her hands. “I started reading, and I couldn’t put it down,” she explains.

Today, Robert holds an associate degree in computer drafting and design. He plans to return to college to study chemical engineering, and he continues to write.

PreviousFranciscan Spirit – Guides on the Path of Change, Fall 2016
NextSister Alicia Honored for Commitment to Patients with Hansen’s Disease