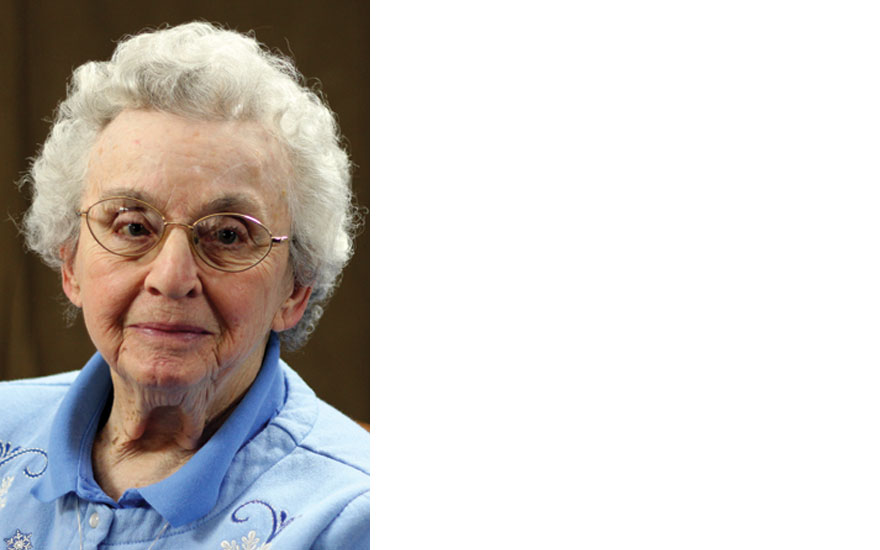 This article originally ran in the “Vital Signs,” newsletter, published by the Professional Nurses Association of Western New York.

There are fictitious depictions of Catholic sisters on television and in the movies, but Sister Mary E. Balthasar, OSF is the real thing! On October 3, 2014, Sister Mary celebrated her life as a Sister of St. Francis for 70 years. This in itself is a remarkable achievement.

When asked what sparked her interest in becoming a nun, Sister Mary stated that at the age of five she was influenced by Sister Dorothy, a Sister of St. Joseph who taught school. She recounted that everyone assumed she would be a nun, and her family expected her to behave as one. Sister Mary was 19 years of age when she entered as a novice. Prior to this, she worked at the Pillsbury Floor Mill, weighing sacks of flour (this was during WWII), and had attended St. Mary’s Hospital School of Nursing in Niagara Falls for one year. The school was run by the Sisters of St. Francis. She stated she was drawn to the order because of its down-to-earth qualities.

Many of you know sister from her activities with the Professional Nurses Association, from being on the Research Committee to stuffing envelopes for mailing. Or perhaps you came into contact with sister when she taught psychiatric nursing at Niagara University. Sister Mary taught there for 41 years. She attended Niagara University herself to obtain her bachelor of science degree in nursing and later attended Catholic University in Washington, D.C where she specialized in Psychiatric Nursing. She brought back her ideas and enthusiasm for mental health issues to the university. I met sister in 1981 when she had been awarded a gerontological grant to integrate content about aging into the nursing curriculum.

Sister Mary became my mentor and friend. Everything I learned about the academic culture, I learned from her. Never having gone to Catholic school, I was initially intimated being around a nun. I also had many misperceptions about nuns. My beliefs were quickly dispelled as I came to see Sister Mary as a caring, warm woman who had a sense of humor. For example, I had trouble remembering to place OSF after her name – she told me it stood for “Oh so fat.” I never forgot the initials after that! Sister possesses a sense of adventure and knows when to use her leverage of being a nun for the good of others.

I would sometimes refer to sister as the “Flying Nun” because she enjoyed traveling and meeting people. Once I accompanied sister to California for a conference. She wanted to introduce me to the Andrus Gerontology Center where she had attended some classes. We got on a city bus. Sister was sitting next to an open window when all of a sudden a breeze swept in, and carried off her veil into the busy street — that was the last time I saw her wear a veil!

Sister Mary obtained her doctorate in education from the University of Rochester, and she encouraged me to do likewise – she was, and is a great coach and cheerleader. After retiring from Niagara University in 1995, she felt the calling to go to Kenya to do mission nursing, and to be a companion to the only other sister from her community who was there at the time. Sister Mary spent 10 years in Timau (about 4 hours from Nairobi), where she was loved by the Kenyans for her caring attitude and generosity.

I visited her there and was gently told what to bring based on what was needed. Even today, Sister Mary can be very persuasive — she can twist your arm without you even being aware of it, but it’s never for herself — it’s always for others.