Sister has long ministry of caring for people 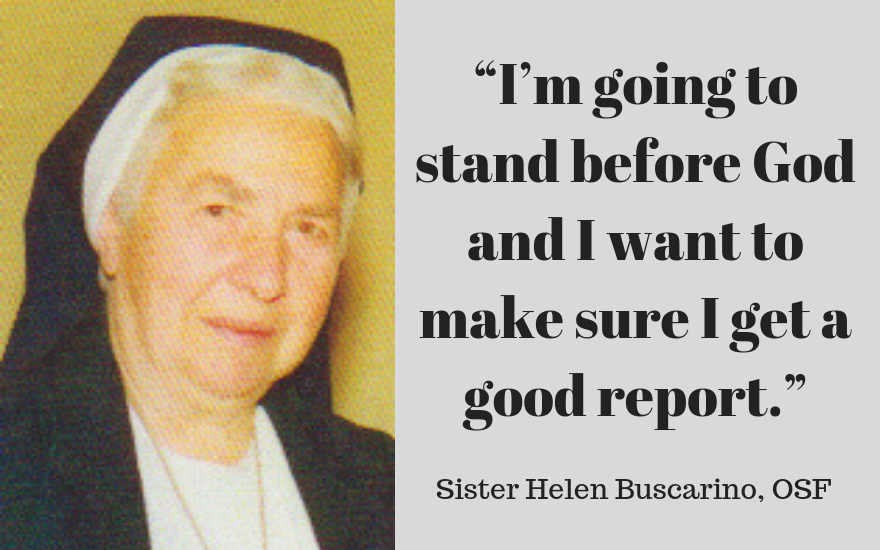 Sister Mary Helen Buscarino, OSF, has come a long distance from her Italian birthplace, and she has met a lot of people along the way. Her life as a Franciscan sister has given her opportunities to help others, and she used every one of those chances to make someone else’s world better.

She admits she had selfish motives.

“I’m going to stand before God and I want to make sure I get a good report,” she said, sitting in the meeting room of the Franciscan sisters Reist Street residence. “Knowing my nature, my impulsiveness, I wanted to make sure I made it up to heaven.”

Her family came to the United States when she was just one-month-old. Although Italian, her father served n the United States Army during World War I. The family settled in Buffalo’s West Side. The Franciscan Missionary Sisters of the Divine Child that gave her religious instruction at Holy Cross Parish helped guide her into the religious life. The order later merged with other Franciscan sisters forming the Sisters of St. Francis of the Neumann Communities, based in Williamsville.

Her life as a missionary was short lived. After a couple short months in San Paulo, Brazil, Sister Helen was diagnosed with colon cancer and needed exploratory surgery. She was told if she did not come back to the United States she would die from an infection. “That ended my missionary work that I wanted to do,” she said.

The Missionary Sisters of the Divine Child was founded to provide religious instruction for public school children and bring Christ to the marketplace by home visitation. So, Sister Helen devoted most of her religious life to those ministries.

She also taught at Immaculate Heart of Mary, Our Lady of Loretto, St. Nicholas and the Diocesan Education Center, as well as schools in Brooklyn and San Antonio, Texas.

In 1975, Sister Helen began a 24-year ministry at St. John the Baptist Parish in Lockport. There she served the migrant workers who came to work at the local farms. They couldn’t work in bad weather, and if they didn’t work, they didn’t eat. The Food Bank of Western New York provided food that could be purchased cheaply. A case of Cheerios cost $1.10. So for just a few dollars, Sister Helen started a food pantry at St. John’s to provide the staples to the migrant workers. The pantry still bears Sister Helen’sname, although she no longer is involved. “If I get a donation I send it to them, but that’s about it,” she said.

She also made home visits, bringing Communion to the homebound and taking Census for different parishes. She liked meeting people with the same values and faith as her.

“They accepted me and I accepted them,” she said. “It was mutual.

Now at age 94, with myasthenia gravis, an autoimmune neuromuscular disease that causes weakness in skeletal muscles which prevents her from driving, Sister
Helen still connects with people, only now it’s through the telephone. She has become an advocate for those in need, calling congressmen and pleading her case. She can
pinpoint the moment she became an advocate. While at St. John’s she joined the parish Peace and Justice Committee after seeing a migrant woman deported back to Mexico,
leaving three children behind.

The Retirement Fund for Religious was set up to provide for the health care and living expenses of elderly and infirmed men and women religious, many of whom
have little or no retirement savings.

“I’m retired. I hated to retire, but I did have to retire. I’m 94, so I really can’t complain that I wasn’t able to keep on,” she said. “Fortunately, I learned to use a computer somewhat,
and I keep myself informed of the issues that are going on and I try to do advocacy work.”

When not helping others, Sister Helen receives some help herself from the Catholic HealthLIFE program. It’s an elderly care program that offers medical care,
nutrition counseling and a satisfying healthy meal.

“They provide everything for us. It saves the community a lot of money, it really does. They pay for our medications, our doctor visits, dental. It’s a wonderful, wonderful
program,” she said.

Always the optimist, Sister Helen sees having myasthenia gravis and being unable to drive or do outside ministry as giving her an opportunity to read more and get more involved in her prayer.