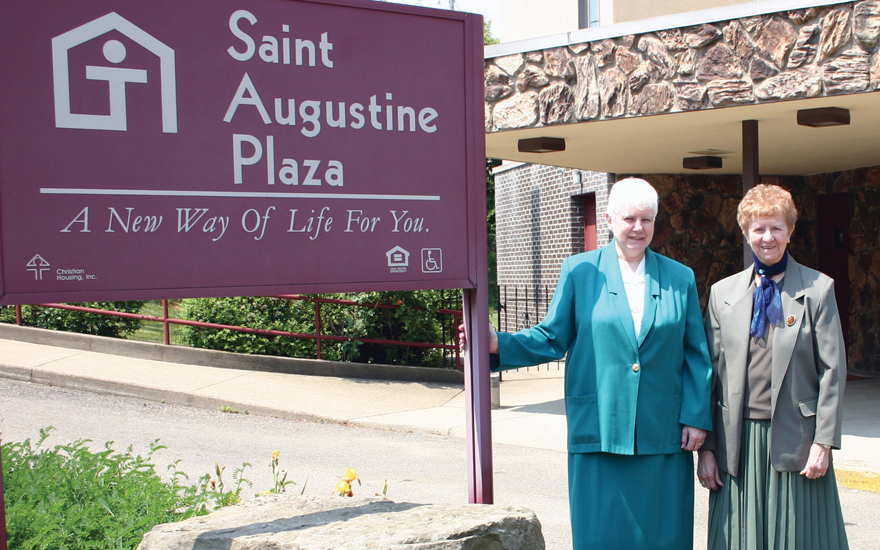 Fifty years ago, Sisters Coleman Conroy and Veronica Marie Phillips, along with Rev. Paul Kuppe, OFM Cap, dreamt of providing affordable housing to Pittsburgh senior citizens who could no longer afford to keep their homes. Far more than a place where the elderly could eat and sleep, they envisioned an apartment complex where seniors could enjoy an independent lifestyle in a safe and family environment; a community within a building that would keep people in their neighborhoods, offer internal support groups and still allow residents the privacy of their own apartments. It was an innovative concept.

This year marks the 40th anniversary of Saint Augustine Plaza in the Lawrenceville section of Pittsburgh, Pennsylvania, an enduring testament to the Franciscan commitment to helping the poor. This high-rise at 36th Street was the first of two dozen to come from Christian Housing Inc., the non-profit organization that Sisters Coleman and Veronica Marie, Father Paul and laymen Frank and Edward Schneider formed in 1972 to bring their bold model to life.

The project stemmed from information that Sister Coleman and several other women religious gathered during a census of Lawrenceville. It showed that services for the elderly were woefully inadequate — many were incapacitated, trapped in multi-story houses with upstairs bedrooms and first-floor bathrooms and without the financial means to maintain the homes. Then Sister Coleman, accompanied by Sister Veronica Marie, spent a month at a public housing facility in Colorado. They returned determined to include balconies, a recreational facility and an on-site manager in any housing they were able to develop.

Sisters Coleman and Veronica Marie continued to teach at Lawrenceville Catholic High School during the early stages of the project. Frank Schneider provided seed money; Father Paul wrote a successful grant for $100,000 from the state. The Capuchins donated land for the building. By the time it was completed, St. Augustine Plaza cost $2.2 million.

Sister Coleman took over operations when Father Paul was transferred to Baltimore. With her understanding of business, Father Paul said she was a capable administrator, perfectly complemented by Sister Veronica Marie’s social management skills. Their hands-on management style built a sense of community among the residents, whose every need were addressed by the sisters. John Bates, an attorney with Christian Housing at its start, credits Sister Coleman as the head and brains of Christian Housing, the individual who ran the housing operation almost from its conception.

Over the years, Saint Augustine Plaza was joined by more than two dozen other housing apartments for the elderly; thousands of seniors have called these apartments home, thanks to the dedication of Sister Coleman Conroy, truly “the pioneer of Christian Housing, Inc.”