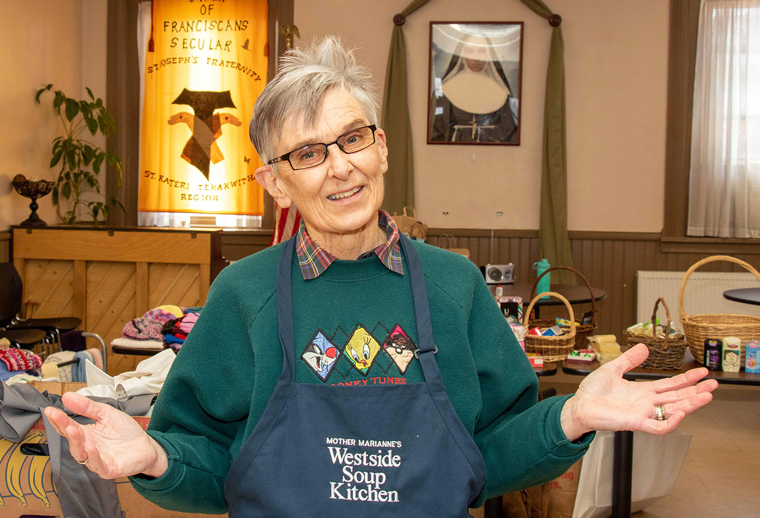 UTICA — Franciscan sisters have returned to St. Joseph–St. Patrick Parish with the appointment of Sister Anne McNulty, OSF, of Syracuse, as the new director of Mother Marianne’s West Side Kitchen.

“We are excited to have Sister Anne on board,” Advisory Board Chair Darren Woods said in announcing the appointment. “She is a member of the same religious order as the soup kitchen’s namesake, St. Marianne Cope, who grew up in West Utica and as a young adult met the sisters who came to teach and care for the poor. It’s like coming full circle.” (The Sisters of St. Francis served the parish for nearly 124 years, from 1860 to 1984.)

Sister Anne succeeds Interim Director Michael Pilat, who took over when Director Edward Morgan stepped back from his duties due to illness.

Sister Anne says her objective is simple — “to assist in providing a welcoming environment, hospitality, and nourishment for the neighbors and guests of Mother Marianne’s West Side Kitchen.”

Sister Anne comes to the soup kitchen with a wealth of experience in education, pastoral counseling, and even organic farming. She was a teacher in dioceses in New York and New Jersey before serving as a chaplain at St. Barnabas Hospice, Milburn, N.J., and SUNY Upstate Medical University Hospital, Syracuse. She worked as a farmer at Brady Faith Farm, Syracuse, where she assisted in the development of an urban agricultural site. She also learned organic farming techniques, which she was able to share with those in need in Aston, Pa.

Sister Anne holds a bachelor’s degree in education from The Catholic University of America, Washington, D.C.; a master’s in theology from the University of Dayton in Ohio; and a certificate in advanced studies from Hazelden Graduate School of Addiction Studies, Center City, Minn.

Mother Marianne’s West Side Kitchen is located at 702 Columbia St. in Utica on the campus of St. Joseph–St. Patrick Church. The soup kitchen’s namesake grew up in the parish before joining the Franciscan order and devoting the last 30 years of her life to leprosy patients in Hawaii.

Robert Stronach is a former newspaper writer and editor who is past chair of the Mother Marianne’s West Side Kitchen Advisory Board.