Menu
News & Events
> S. Martha Torbik Shares Why She is a Volunteer for Wreaths Across America

S. Martha Torbik Shares Why She is a Volunteer for Wreaths Across America 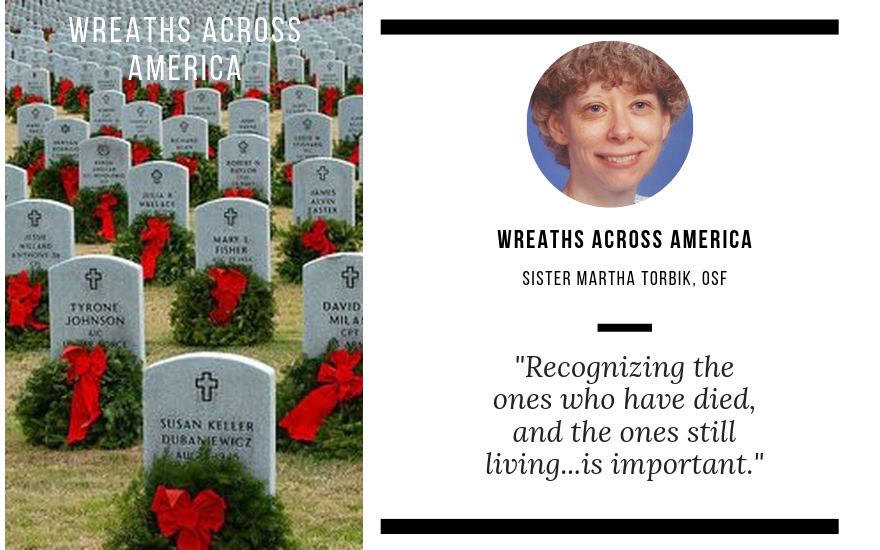 Editor’s Note: Wreaths Across America volunteers honor our military and veterans by placing wreaths on the graves of those soldiers who have passed. Wreath Radio celebrates those volunteers by telling their stories in a feature called “What’s Your Why?” Recently, our own S. Martha Torbik was interviewed about her experience as a Wreath Across America Volunteer. This is the story that appeared on the website.

S. Martha Torbik Shares Why  She is a Volunteer for Wreaths Across America

Sister Martha Torbik is a member of the Sisters of St. Francis of the Neumann Communities, and living in New York. She discovered Wreaths Across America a few years ago through a link she saw on PBS.org after listening to the National Memorial Day Concert. “I was surprised to find out it’s been going on so long,” Sister admits. “I had never heard of Wreaths Across America before.” Her parents are buried at Arlington National Cemetery as her father, Bernard Torbik, served in the U.S. Army during World War II. “They’re in the columbarium, and I sponsored a wreath for them, but I knew I couldn’t commit to making the trip personally with winter weather. I found out there was a ceremony closer to me at Onondaga National Memorial Cemetery, so I volunteered to help there.”

2017 was Sister Martha’s first wreath-laying experience, and she shares how the connection made through a fresh, balsam fir veteran’s wreath impacted her. “At the same time I was placing wreaths in New York, I knew someone would be placing wreaths at the base of my parent’s niche in Arlington. So, this is an opportunity for me to do the same for someone else’s family. It was an honor to be able to do that. At the ceremony this year, in addition to saying their names, we were encouraged to take the name of the veteran home and research their story. I realized I could find the military service of the veterans I was honoring just as I had found that of my dad.”

Sister Martha is glad to see better recognition for our veterans and believes in the Wreaths Across America mission to remember, honor, and teach. “Recognizing the ones who have died, and the ones still living, especially those who have become disabled as a result of their war involvement, particularly those with PTSD or mental illness, is important. Wreaths Across America and remembering our veterans each day for what they do is critical to respecting and appreciating what they’ve done for us.”

In addition to honoring her parents, Sister Martha is fond of remembering a group of servicemen who went unrecognized for years. While teaching on the Pine Ridge reservation in South Dakota, she was immersed in Native American culture and became interested in the story behind the Navajo Indian Code Talkers who received little-to-no recognition about their incredible service for almost 40 years after World War II ended. “They used the Navajo language, unwritten at the time, to create a code the Japanese were unable to break. One of the things I found fascinating was the Japanese couldn’t break the code, but they were pretty clever at finding where the encoded messages were coming from so the Code Talkers had to pick up and leave within minutes of transmitting.” In 2016, Wreaths Across America had the privilege to interview a retired U.S. Marine who served as a Code Talker protector. John has since passed.

In 2019, three of the surviving World War II Code Talkers passed away, the most recent in June. After filling out an online survey for Wreaths Across America earlier this year, Sister Martha was selected in a random drawing to receive 100 sponsored wreaths for a location of her choosing. “Through my research, I discovered there are many Navajo Code Talkers buried in the Santa Fe National Cemetery. That’s where my veterans’ wreaths will be sent to honor these brave souls credited with helping to win the war in the Pacific.”

You can hear more from Sister Martha Torbik’s interview in our “What’s Your Why?” features airing on Wreaths Across America Radio.