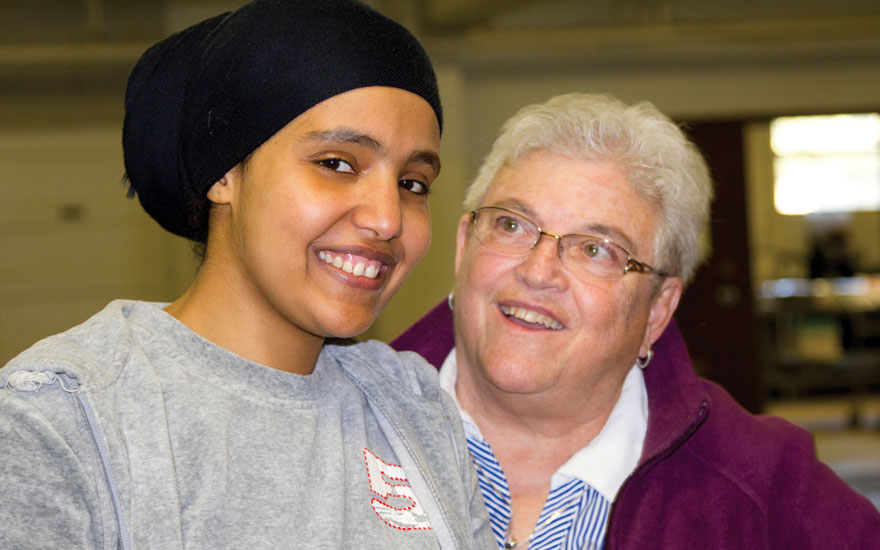 Do not neglect to show hospitality to strangers, for by doing that some have entertained angels without knowing it. Hebrews 13:2

When Cecil arrived on the steps of Vive, Inc., a center for refugees in Buffalo, New York, he was broken in body and spirit. The microloan project he initiated to help his neighbors in Zimbabwe establish small businesses earned him the label anti-government activist. He fled his homeland to escape more illegal imprisonments and continued torture.

Patience only wanted to protect herself and her two children from her husband’s physical abuse but her repeated requests for a divorce were always denied by the Nigerian Registry of Divorce. When leaving the country became her only option, Patience, her daughter and son ended up at Vive.

Ramson expected to return to Zimbabwe and use the training from the conference he was attending to mobilize people in the rural provinces to work against a corrupt government. But when a former government minister — one to whom Ramson had secretly supplied information — and his brother-in-law both died in separate suspicious car accidents, Ramson’s family and friends told him not to come back. He arrived on Vive’s doorstep with just a suitcase.

Vive, Inc. was established in 1984 by the Sisters of St. Francis of the Neumann Communities and eight other congregations of women religious. At the start, the sisters would invite refugees heading to Canada from Central America to stay in convents and region houses while they waited for an appointment with Canadian officials. Several years later, the sisters turned a convent into a refugee house and staffed it with volunteers. In 1991, they converted a former school on Wyoming Street in Buffalo into a shelter that can house as many as 118 people who are applying for asylum protection in the U.S. or who are waiting to enter Canada.

“We’ve had over 95,000 people come through Vive. We get at least 2,000 a year, if not more,” says Sister Beth Niederpruem. “They come from all over the world. You name a country — a new country, an old country — and we’ve had them come from there.”

At first, people found the shelter through word of mouth. “It seemed as if people told people, relatives told relatives, townspeople told townspeople. So the refugees would come in with a little slip of paper with the address written down,” Sister Beth says. “Now with the Internet and smart phones, people are finding us that way.”

For refugees looking to join blood relatives in Canada, a stay at Vive generally lasts one to three weeks. A legal expert at Vive reviews their documents to ensure that all are in proper order. Gaining refugee status in the U.S. is considerably more complicated and can take anywhere from six months to five years.

“Once they get their working papers, they will try to get out of the shelter but that depends on how much money they can make. You’re talking a good $2,000 you have to have in the bank to rent an apartment,” says Sister Beth.

“We tell them they are going to see people with guns, for example, because that’s what they’re usually running from,” says Sister Beth. For individuals wishing to stay in the U.S., Vive’s attorney either handles the case or refers the individual to Legal Services or pro bono immigration attorneys. They help parents enroll their children in school, assist adults in securing working papers and provide meals and clothing along with shelter.

“Basically, it’s security and safety that we try to build,” says Sister Beth. As a social worker, her primary role is to help individuals who have fled significant abuse address post traumatic stress-related issues. “We have rape victims who have been attacked eight or nine times. We’ve had people who have moved their children because they would be mutilated. There are people who have witnessed their families slaughtered.”

For Cecil and Ramson, the sudden change in lifestyle and guilt over having left family behind added to their anxiety. “It’s quite amazing and quite disturbing when you are in trouble and you become homeless at the same time. The problems become overwhelming. At some point, you stop thinking. You cease to exist mentally. You become like a block. I was in that situation,” Cecil says. “At the same time I felt like a coward for leaving my family behind, for exposing them to things they weren’t supposed to go through. With the help of the sisters, they managed to mold me back into a certain shape, brought back my sanity.”

“I came here with all of five business suits. I parked my car at the airport. Now, I don’t have a car. This place is getting cold. I appreciate that I have food and a place to stay. But I did not escape. I was going to go to a conference and then go back home to be the hero that I thought I was,” says Ramson. Meeting with Sister Beth one day, he broke down in tears. “She set me up with a psychiatrist and I had some sessions that helped,” he says.

Ramson and Cecil are both working and living on their own but they continue to do whatever they can to help Vive. Patience’s children are both in school; her daughter recently underwent surgery to repair a hip that was broken when her father pushed her. Patience also is in school, preparing to be a nurse.

“I thank God I’m here, I keep saying that every day,” she says. “I appreciate everything that is going on here at Vive. Everything has been going fine. I keep thinking, ‘how am I ever going to do it without Vive? They are here for us.’

“My life is entirely different.”

PreviousA Reflection on Mercy: Called to Live God’s Mercy
NextEmpowering Victims of Human Trafficking One Pop Tab at a Time