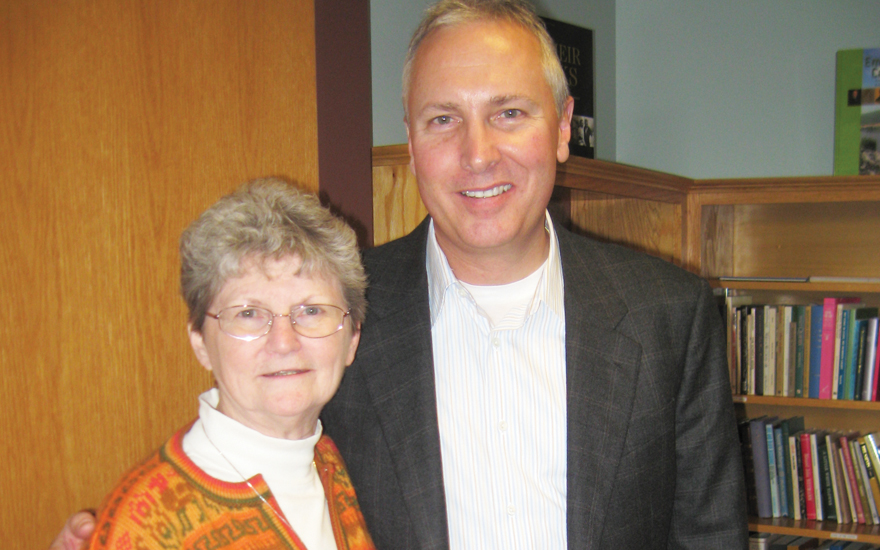 Bernie Pistillo is a partner in the San Francisco, California office of Morrison & Foerster’s federal tax group. He has provided tax advice to many of the world’s largest corporations, investment banks, hedge funds and other financial institutions. He has traveled throughout the world during his very demanding and successful career. Through it all, he has also taken time to play an integral role in the lives of our sisters.

Bernie was raised in Omaha, Nebraska. Following his mother’s death in 2002, Bernie found a note by her bedside that he had never seen before. It read, “The Sisters of St. Francis need $4.2 million.” He wondered to what sisters she was referring. He soon learned that it was our sisters in Williamsville, New York, and his mother had been interested in our Adopt A Sister Program. Bernie decided to make a gift to our congregation in her memory.

Soon after his gift was received, Sister Marian Rose Mansius, then general minister, sent Bernie a personal thank you letter informing him that his gift had been used to name a beautiful stained glass window in the chapel “In Loving Memory of Eleanor Pistillo.” Bernie was very touched, and a special relationship with the sisters was formed.

Bernie’s life has been filled with changes — moves from London to New York City to San Francisco. He escapes from the mergers and acquisitions, private equity funds and other international transactions at a home he owns in Arizona. No matter where he travels, he always stays in touch with Sister Marian Rose.

Sister Marian Rose has also gone through many changes in her life. She grew up in Lancaster, New York, and professed her final vows on July 1, 1963. She spent 11 delightful years ministering in Puerto Rico, where she became bilingual, and then served as a teacher and principal in Illinois, Ohio, and Florida before finally returning to western New York. In 2001, she was elected general minister of the congregation, a position she held until 2004 when she was elected into the leadership of the newly formed Sisters of St. Francis of the Neumann Communities. She moved to Syracuse where she continued to serve in demanding leadership positions for eight years. In 2012, she returned to Williamsville where she serves as coordinator of life’s services.

Despite the many twists and turns in their lives, Bernie and Sister Marian Rose have maintained what Bernie calls “a complex and beautiful relationship.”

“We have formed a multi-dimensional relationship,” Bernie says. “We have become close personal friends. There is also a spiritual side that we share, and part of it is unspoken as well. Sister Marian Rose has a mothering influence on me. She watches out, loves, cares and prays for me. I really do believe that she was sent to me by my mother.”

Sister Marian Rose describes Bernie as a deeply spiritual person. They share prayers and spiritual books, and have gone on retreats together. “I appreciate our friendship on all levels,” she says, “the spiritual as well as the personal. I love Bernie dearly, and pray for him every day. We also like to share happy moments, especially when Bernie comes to visit. Our sisters always look forward to seeing him, and we are so appreciative of his love and generosity, supporting us in so many ways!”

Bernie has a very demanding lifestyle, and is grateful to have someone looking out for him, especially during the joyful and difficult times. “Sister Marian Rose helps me put things into perspective, even in my very, very busy moments,” he says. “We talk, email, text and communicate very regularly, and that keeps our bond strong.” It definitely is a very loving and prayerful relationship, and one that will last for a very long time.

PreviousWeaving a Social Media Tapestry
NextWe Give You Thanks And Praise