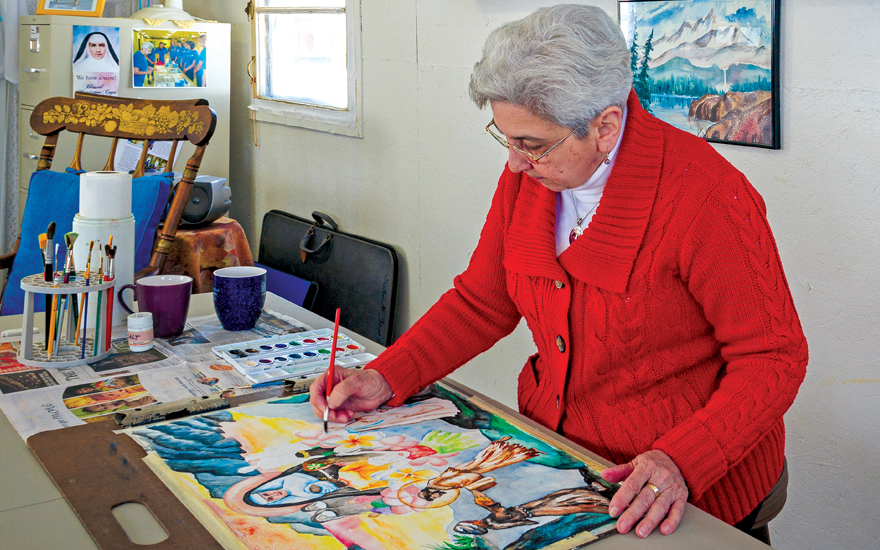 Through the course of our lives, there are, no doubt, a number of people who inspire us to become better versions of ourselves.

For Sister Joselle Orlando one of those people is our own St. Marianne Cope. “She’s a real person to me, she’s not just a saint that I read about,” says Sister Joselle.

Upon entering the Sisters of St. Francis in Syracuse New York, both women began their ministry as teachers at Assumption High School in Syracuse. “Mother Marianne made her profession at Assumption Church,” explains Sister Joselle. “So you know I was always connected with her through my entire life as a Franciscan. She’s just a part of my life.”

Like Mother Marianne, Sister Joselle courageously continues to say “yes,” being open to God’s call when opportunities for new ministries come her way. “I know that gifts that are given to us are given for others, and the more I give, the more has come back to me.”

Sister Joselle maintains a busy schedule filled with creative endeavors and activities together with her sisters in community. She continues to work on personal art projects while also producing artwork for the Saint Marianne Cope Shrine & Museum in Syracuse. Kristin Barrett-Anderson, shrine and museum director, says she reflects “joy in her life and work,” embodying one of the basic virtues of St. Francis of Assisi and the Sisters of St. Francis.

The museum’s gift shop sells note cards and a children’s prayer card which feature Sister Joselle’s watercolor images. The prayer card invites children to think about the virtues of compassion, respect, spirituality and courage, attributed to Mother Marianne, and how they can incorporate those virtues in their everyday lives.

Recently, Sister Joselle has embarked on a new project: teaching adult art classes in her studio at the Spirituality and Nature Center at Alverna Heights in Fayetteville, New York.

Here Sister Joselle leads an Art as Prayer retreat, teaching non-artists how to use simple watercolor techniques as a language of prayer.

Sister Joselle says art as prayer can be used as a path for spiritual development. “I tell them, ‘It is not the product that you’re going to be displaying in a museum, it is the experience you have when you’re using simple art tools. It’s what you feel inside.’”

Her goal is to give students the confidence to explore their artistic nature —“a part in them where there’s creativity they didn’t know they had.”

Although she considers art her vocation, Sister Joselle says she expresses her faith through all aspects of her life. “I can’t divide up my life into art-prayer, music-prayer, dance-prayer, vocal-prayer, talking with another person, talking with a child, it’s all one, it’s all God living through me and hopefully touching the hearts and lives of other people.”

One way she does this is by serving as a volunteer three times a week at St. Joseph’s Hospital Health Center in Syracuse. Assigned to the surgical waiting room, she interacts with the family members of patients who are in surgery. Sister Joselle says she recognizes the anxiety families feel and she tries to comfort them by offering a smile, a “hello” or engaging them in a conversation.

“I tell them my job is just to tell you I’m praying for your loved one who’s in surgery today — who is it and how are you? And then we talk about so many other things. It’s just a wonderful gift.”

“She kind of has a natural gift for being empathetic and sympathetic,” Sister Jacqueline says. “She’s got that warm Italiano heart, and you know she’s just a natural with people.”

During her encounters, Sister Joselle spreads a message of compassion and shares the legacy of Mother Marianne, who helped to found St. Joseph’s Hospital in 1869, “opening it for the people who had no hope.”

It seems fitting that Sister Joselle volunteers at the same hospital Mother Marianne helped to establish, as Sister Jacqueline sees similarities between the two women.

“Mother Marianne was very creative … no matter what was expected of her she went right in there and did it,” Sister Jacqueline says. “She had no college degree and yet she taught, she was a principal, she became a founder of hospitals … and I can see Joselle doing this too. She’s got a job to do, she forges ahead and does it. And she does it in a very meaningful way.”

Attend one of Sister Joselle’s classes or retreats. > 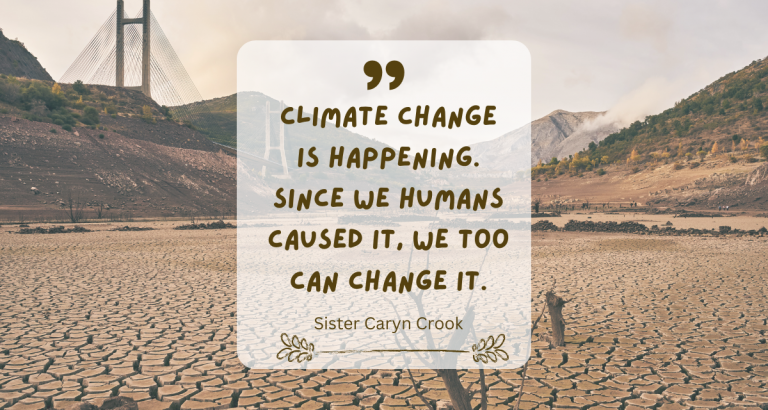