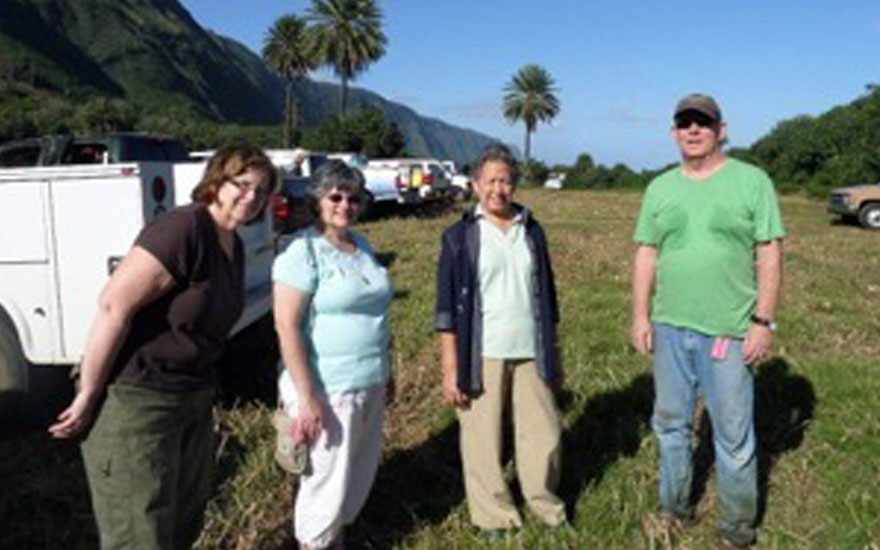 While volunteering at Kalaupapa, Hawaii last spring, tourists often asked “How did you get a volunteer opportunity in Kalaupapa?”

We responded by explaining that the catalyst was a short message in the Franciscan Associate newsletter during the Christmas holidays informing us that our Franciscan sisters in Hawaii were in need of a volunteer to help out in Kalaupapa We both put this opportunity on the back burner because like so many people during Christmas, our priorities were elsewhere.

After our Christmas celebrations, we started to discuss the possibility of volunteering at a location which was six time zones away. As Franciscan Associates, we typically raise our hands and want to volunteer but for this opportunity, we needed to know exactly what was required since impact to family members needed to be taken into consideration.

In 2007, we went on a five-hour guided tour of Kalaupapa, so we knew firsthand what this opportunity was about. However, we knew a five hour tour didn’t give us the whole story about what was required for living three months on Kalaupapa.

Sister Pat Larkin from Syracuse, New York put us in touch with Sister Alicia Damien who resides in Kalaupapa to see what was required. To her surprise, Sister Alicia was not counting on two associates, particularly a husband and wife, to assist Sister Theresa Chow.

After many phone calls, emails and prayer, we decided to check it out for two weeks in February before we committed to three months. Thanks to our son, Michael, we were able to fly standby to Honolulu, Hawaii on Delta Airlines at no cost.

Immediately upon arriving, we were in awe of the beauty of Kalaupapa and simultaneously felt the spiritual presence of the two saints who served there: Mother Marianne and Father Damien. After the two weeks in February, we signed the volunteer agreements with the National Park Service (NPS) to be there for three months, May through July.

Our duties consisted of being a companion to Sister Theresa Chow, living at the Bishop Home complex in St. Elizabeth Convent. The convent is a NPS building reconstructed in 1932 to house up to seven sisters. We took the Jack and Jill setup on the first floor near the kitchen.

Our daily schedule consisted of attending Mass at 5:45 a.m. and working on the Bishop Home complex after morning prayer and breakfast. Helen ensured Mother Marianne’s grave was tended to each day before the Damien Tour visitors arrived. Terry tended to the high grasses by weed wacking.

Terry also served as chef and chauffer for Sister Theresa (sister enjoyed sharing these duties since she has been doing them for six years). We interacted with the patients at Mass, at their workplaces or in the care home. In addition, we met with the many pilgrims who toured Kalaupapa.

The presence of Mother Marianne and Father Damien are very apparent on this peninsula. We often discussed how it must have been in 1888, when Mother and the sisters arrived to tend to the patients. At the present time, we lived in this settlement along with 100 people (9 patients, 40 Hawaiian Health Department and 50 NPS workers), internet connectivity, electricity, and clean, fresh Kalaupapa water. Medical solutions for people with Hansen’s disease are being administered. Yet, this was not how it was in 1888 for Mother Marianne and the sisters! They were required to care for 1,100 patients with no medical solution yet in place!

Our Franciscan sisters who have lived on Kalaupapa and tended to the patients are forever in our hearts. We left Kalaupapa with so many blessings, ever so more than we gave. Kalaupapa will be forever a very special place in our hearts. Hopefully, the attached pictures convey our story!