Menu
News & Events
> In the News: Hope Amid Despair

In the News: Hope Amid Despair 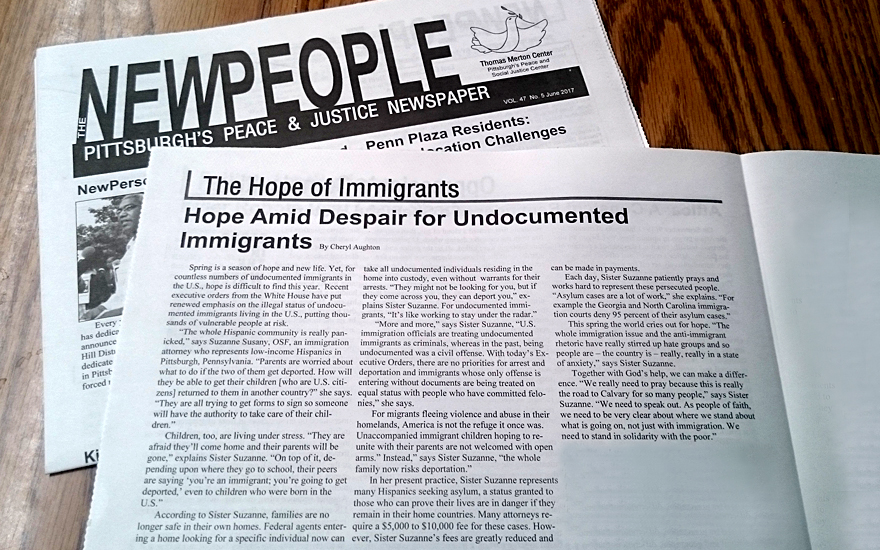 Sister Suzanne Susany is featured in a recent New People article about how she is called on now more than ever to bring hope to undocumented immigrants and their families. The New People newspaper is published by the Thomas Merton Center in Pittsburgh.

Spring is a season of hope and new life. Yet, for countless numbers of undocumented immigrants in the U.S., hope is difficult to find this year.

Recent executive orders from the White House have put renewed emphasis on the illegal status of undocumented immigrants living in the U.S., putting thousands of vulnerable people at risk.

“The whole Hispanic community is really panicked,” says Suzanne Susany, OSF, an immigration attorney who represents low-income Hispanics in Pittsburgh, Pennsylvania. “Parents are worried about what to do if the two of them get deported. How will they be able to get their children [who are U.S. citizens] returned to them in another country?” she says. “They are all trying to get forms to sign so someone will have the authority to take care of their children.”

Children, too, are living under stress. “They are afraid they’ll come home and their parents will be gone,” explains Sister Suzanne. “On top of it, depending upon where they go to school, their peers are saying ‘you’re an immigrant, you’re going to get deported,’ even to children who were born in the U.S.”

According to Sister Suzanne, families are no longer safe in their own homes. Federal agents entering a home looking for a specific individual now can take all undocumented individuals residing in the home into custody, even without a warrant for their arrest. “They might not be looking for you, but if they come across you, they can deport you,” explains Sister Suzanne. For undocumented immigrants, “It’s like working to stay under the radar.”

More and more, says Sister Suzanne, U.S. immigration officials are treating undocumented immigrants as criminals, whereas in the past, being undocumented was a civil offense. With today’s Executive Orders, there are no priorities for arrest and deportation and “immigrants whose only offense is entering without documents are being treated on equal status with people who have committed felonies,” she says.

For migrants fleeing violence and abuse in their homelands, America is not the refuge it once was. Unaccompanied immigrant children hoping to reunite with their parents are not welcomed with open arms. Instead, says Sister Suzanne, the whole family now risks deportation.

In her present practice, Sister Suzanne represents many Hispanics seeking asylum, a status granted to those who can prove their lives are in danger if they remain in their home country. Many attorneys require a $5,000 to $10,000 fee for these cases. However, Sister Suzanne’s fees are greatly reduced and can be made in payments.

Each day, Sister Suzanne patiently prays and works hard to represent these persecuted people. “Asylum cases are a lot of work,” she explains. “For example the Georgia and North Carolina immigration courts deny 95 percent of their asylum cases.”

This spring, the world cries out for hope. “The whole immigration issue and the anti-immigrant rhetoric have really stirred up hate groups and so people are – the country is – really, really in a state of anxiety,” says Sister Suzanne.

Together with God’s help, we can make a difference. “We really need to pray because this is really the road to Calvary for so many people,” says Sister Suzanne. “We need to speak out. As people of faith, we need to be very clear about where we stand about what is going on, not just with immigration. We need to stand in solidarity with the poor.”

PreviousSisters to All
NextSister Kathy Recognized at Franciscan Federation