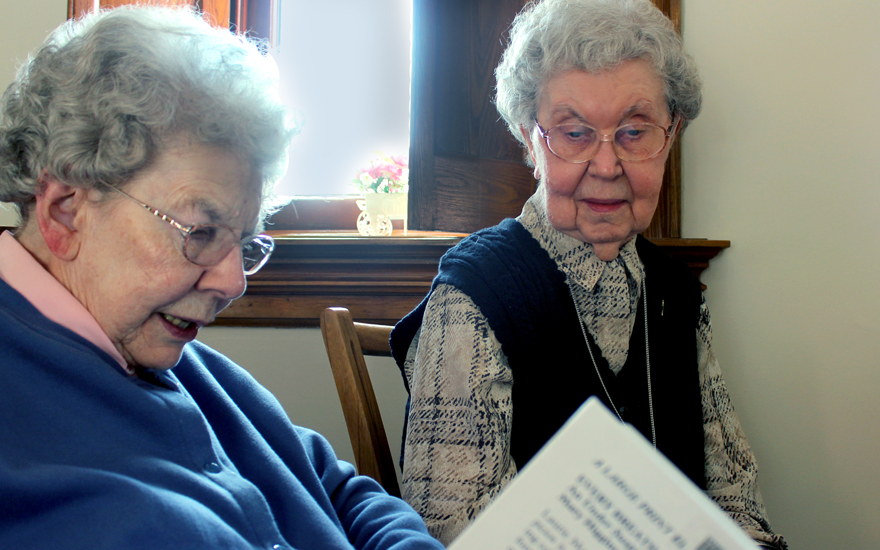 As a child during the Great Depression, Sister Elise Renk would walk more than two miles from her home in Pittsburgh’s Mount Oliver neighborhood to the South Side library where she would borrow books to read. Now 100 years young Sister Elise still loves to read; thanks to Sister Catherine Paff who reads to her every day at their Mount Alvernia home, she enjoys stories and keeps up with the latest news.

As a student at the former St. Henry School in Mount Oliver, Sister Elise admired the Millvale Franciscan sisters who educated her. “They were real role models because they were the finest teachers,” she says. “They really challenged us. They were firm, they were well prepared and they really taught us well.”

By age 13, these sisters instilled in Sister Elise the desire to become a teacher as well as a woman religious. “They were all strong women,” she says. “They were just perfect!”

Sister Elise earned master’s degrees in education and in secondary administration then served as a teacher and principal at seven Catholic schools in the Diocese of Pittsburgh for 50 years. The most rewarding part of her ministry was teaching biology to tenth graders. “Biology is the story of life and creation and that fit right in my basket,” she says. “You could just light them up and you could see when what you were saying was hitting them.”

She always involved students in hands-on activities, introducing them to things they never knew existed like rutabagas and kiwi fruit. “I could get them interested in themselves and everything God made, all the fruits and vegetables and the stars.”

In 1990, when Sister Elise began working at the former St. Francis Medical Center in Pittsburgh’s Lawrenceville neighborhood, she learned to use a computer. “I’m a person who likes a challenge and I don’t want to become stagnant,” she says. “I want to live out my life interested in what is going on.”

As a centenarian, Sister Elise says she’s grateful to be alive in the Information Age, and still spends time on the computer. “I can still do games and they are a challenge because they make you think,” she says. Sister Elise also enjoys attending weekly exercise classes, fitness walking and writing letters to friends and family members.

Her secret for living to be 100? A positive attitude. “You have to try to be positive even though many times there are hardships that are negative,” she says. “You still have to try to find maybe a speck of good in it and enjoy what you are doing.”

Sister Elise, who turns 100 on Saturday, March 17, will celebrate her special day with family and friends during birthday party at Mount Alvernia in Millvale.

PreviousLive Lent With Love: A Reflection by Sister Marian Rose Mansius
NextEven After Death, Life Continues For Each Of Us