Guiding the Search for Spirituality 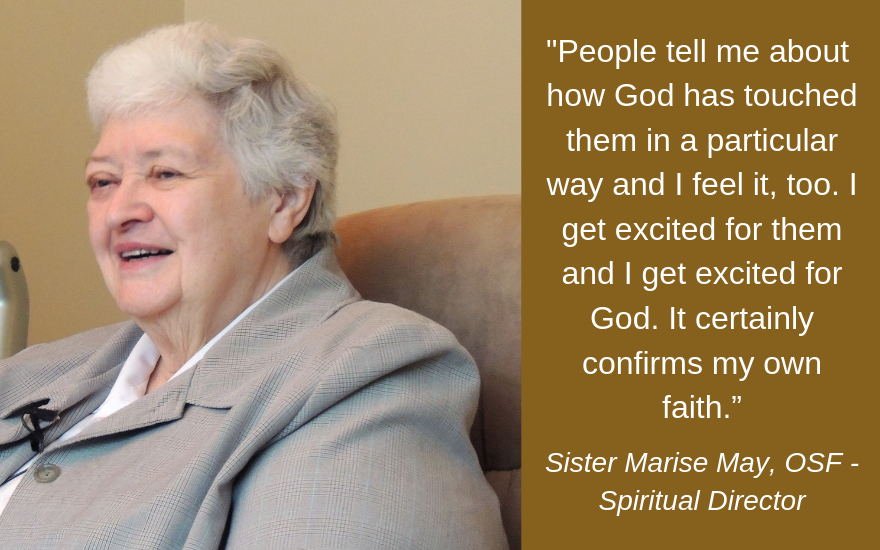 There is a great hunger in people today, says Sister Marise May, and they are looking for something to fill it.

“People know there’s something beyond the materialism of today’s culture, they’re searching for something that really satisfies. And you see people look for that satisfaction, that fulfillment in all kinds of things — certainly in alcohol, drugs, and sex, purchasing everything under the sun. And it doesn’t do it, it leaves them dissatisfied,” she says.

What can help fill the void is a connection with God, says Sister Marise; her ministry is to help people make that connection.

Sister Marise is a spiritual director, a guide for people looking to better understand their faith. “Spiritual direction might look like therapy but instead of helping people with their relationships with other people, we work on your relationship with God,” she says. “People might bring some of the same raw material they would bring to counseling but I don’t help them solve their problems or change in a psychological way; I talk with them about how do they bring that issue to God, how do they talk to God about it, and how can God be a part of their everyday life.”

Despite reports that fewer people consider themselves religious — what Sister Marise defines as adhering to a set of doctrine and worship in a particular denomination, she says many people are interested in spirituality.

“It’s amazing how many people are interested in who is God and who is God for me,” she says.

May’s first ministry was as a teacher; she was attending a spiritual retreat when another sister “saw something in me and encouraged me to do spiritual direction,” May says. She began training, conducting retreats, and did internships before earning her Doctor of Ministry in Spiritual Direction.

“I usually start with inviting the person into a few minutes of silence and have them begin with whatever comes to them,” May says of her sessions with directees. “They begin talking about whatever is going on in their life. The questions I ask as a director are about how they bring that to God. It’s about prayer, but not just the prayers you read in books. We focus on the relationship with God but of course, the everyday of their lives comes into because that’s where God is, where God wants to be — in our everyday human stuff.”

Sister Marise currently is on the staff of the Spiritual Renewal Center in Syracuse, New York, where just under 300 people from many denominations come for spiritual direction each month. Directees are primarily middle-aged or older, men and women and lay, religious and ordained. “We also get some people with no religion at all who are interested in this God that they have heard about and want to get to know better,” she says.
Over the course of their sessions, Sister Marise says she sees directees increasing the time they spend in prayer, most often in a quiet, more contemplative way. While their lives are not any less trouble-filled than people who don’t pray, she says directees “feel like they’re not alone, that God helps them get through it.” She sees her own spirituality deepen as well.

Article found in the Winter 2019 issue of the Franciscan Spirit https://issuu.com/sosf/docs/fs_q1_2019