From Refugees to Family

Mauricio and Evelyn Melara were 18 when they left civil war-torn El Salvador in 1988. They walked to the Mexico – U.S. border and eventually ended up in Buffalo, New York, hoping to gain entry to Canada. But a backlog of refugees left them, and hundreds of other asylum seekers stranded in Buffalo with little money, limited English-speaking skills and no place to stay. 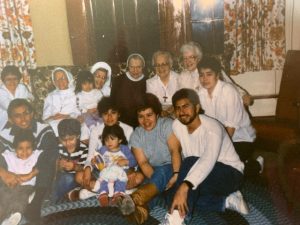 That’s when the Sisters of St. Francis opened the doors of St. Mary of the Angels, the sisters’ region house that was then located on Mill Street in Williamsville. Sister Dorothy Smith raised the idea to the congregation’s leadership who brought the question to all the sisters. The result was that the Melaras and another family were invited to stay at Mill Street with the Sisters.

The Sisters were already supporting Central American refugees flooding the U.S. on their way to Canada in the 1980s. Along with several other Sister communities, local churches and individual donors, the Sisters of St. Francis joined in the establishment of the Central American Refugee Organization in 1984. The organization had limited space where individuals and families could stay until they met Canada’s immigration requirements. (Central American Refugee Organization eventually became VIVE, which still offers housing and legal support to people seeking asylum status in the U.S. and Canada).

Sister Alice Gilabert spoke Spanish and was able to converse with Mauricio and Evelyn. “They told us how they got to the Mexican-U.S. border from El Salvador on foot,” she says. “At that time, El Salvador was a dangerous country. A Jesuit priest was assassinated by security forces, a lay missionary and two Maryknoll sisters were killed by the El Salvador National Guard and a sniper killed Archbishop Oscar Romero.”

The young couple remained with the sisters for four months before leaving for Canada on Aug. 2, 1988 — the Feast of St. Mary of the Angels. “I along with a number of Sisters were committed to stay in touch with these two young people who became family to all of us,” Sister Alice says.

It’s been over 30 years and the bond between Mauricio and Evelyn and the Sisters remains strong. “We stay in touch on FaceBook and with phone calls,” Sister Alice says. “Last August, they and their son, Juan Manuel, came to visit Sister Lois Jean (Nunweiler) and me at our home (St. Aloysius Convent in Springville, New York). We had a great time together. We enjoyed Chinese food and shopping at our local Walmart, one of the family’s favorite places to visit when they are here. It’s always great to catch up with them in person.” 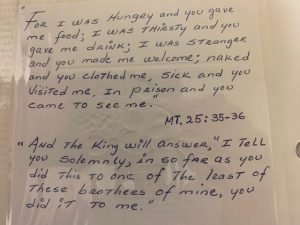