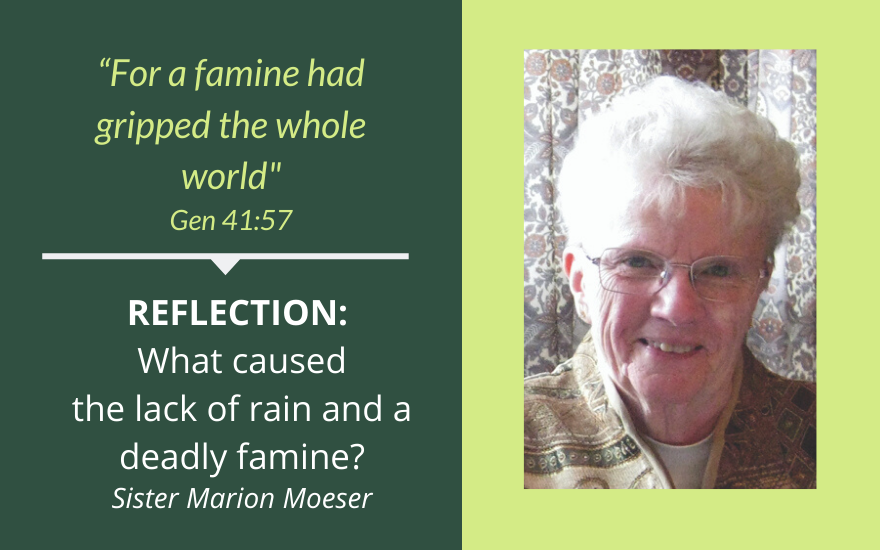 Concerns about the lack of rain and famine are expressed often in the Old Testament. Worshiping false gods, particularly Baal the Canaanite god of the weather, is condemned. Rain is needed for animals and humans to survive; which god would provide rain? The story of Elijah’s contest with the prophets of Baal (1 Kings 18) begins with a famine in Samaria. Elijah warns the people about “straddling” the issue — praying to the LORD (Yahweh) and to Baal. A contest follows. The prophets of Baal cannot produce fire to begin a sacrifice to their god, but Elijah has fire for his sacrifice to Yahweh and there is “a heavy rain.” It’s an obvious call to worship Yahweh alone. Psalm 68:11 thanks the LORD for rain, “given to the poor in their need,” clearly expressing a lived reality or a community memory.

What caused the lack of rain and a deadly famine?

Recent scientific studies as well as the disappearance of highly developed empires in 1500-1200 BC Greece, Turkey, Canaan, and Egypt shed some light. Leslie J. Hoppe, OFM, an Old Testament scholar who studies biblical land archaeology wrote about climate change during this time. Winds blowing over the surrounding regions deposited pollen in the nearby sea. Scientists took samples from sediment deep beneath the Sea of Galilee and studied the pollen. They learned that during the Bronze Age, vegetation changed from the trees and grains of a temperate climate to shrubs and other vegetation from arid lands, evidence that a famine did occur. This could account for the demise of great nations.

The question remains: What caused this climate change? Hoppe turns to scientific studies of the Greenland Ice Sheet. The research shows that temperatures in Greenland rose around 1200 BC and the glacier began to melt, releasing cold water into the Atlantic which eventually entered the Mediterranean Ocean. This caused a decrease in evaporation from the sea and therefore less rainfall, a situation that lasted almost 200 years.

Hoppe concludes: “Since it seems that climate change and migrations contributed to the collapse of the Bronze Age world, one might reasonably ask whether the same will happen again to our world? It is by no means clear, of course, that we will go the way of the … (ancient cultures) …, but there are more similarities than one might expect between our world today and theirs back then.”

In his encyclical, On Care for our Common Home, Pope Francis acknowleded the current debate about climate change, but also writes: “But we need only to take a frank look at the facts to see that our common home is falling into serious disrepair” (61).