Finding Jesus in the Temple 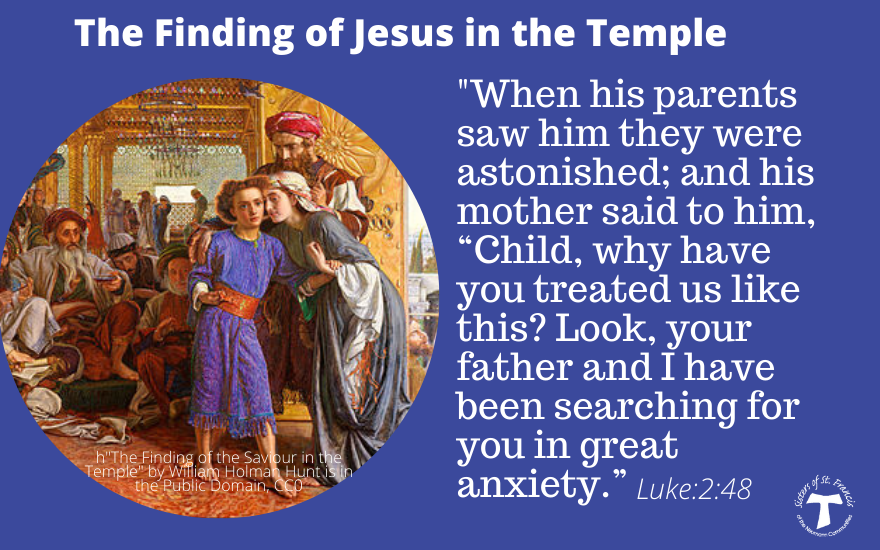 As I write this (May 8), the New York State Police have issued an Amber Alert for a 9-year-old missing boy, Gustavo, probably kidnapped. The alert features the boy’s name, hair and eye colors, and what he is wearing.  All were asked to be on the look-out for him. Thankfully, he was found safe.

The Vatican II teachings on reading and interpreting scripture emphasize that the reader be aware of the historical situation described in the verses as well as the experiences of those living in that time, both in the story and in the gospel’s audience.

The fifth joyful mystery of the rosary is the “Finding in the Temple.”  The story is in Luke 2:41-52; the passage concerns an adolescent Jesus. Here we reflect on what a missing 12-year-old son would mean to parents of his time.

Most know the story: Joseph, Mary, and Jesus were in Jerusalem for the Passover feast. Returning home to Nazareth, Mary and Joseph travel a full day before noticing that Jesus is not in the caravan. Frantic, they return to Jerusalem searching for Jesus — no such thing as an Amber Alert in those days. Joseph and Mary find Jesus among the teachers in the Temple. The text does not tell us, but one can only imagine Mary and Joseph’s relief and joy. Mary asks Jesus where he has been, and Jesus responds with a question, “Didn’t you know I must be about my Father’s business/house?” Then he returned home with them.

To better understand what losing Jesus would mean to his parents and the early Christians, it is important to know the death-rate of children at that time. Socio-historical writers tell us that of those who survived infancy, nearly a third were dead by age six, 60 percent by their mid-teens, and 75 percent by their mid-twenties. In 1990 archaeologists excavated the burial tomb of the High Priest Caiaphas and found the remains of about 60 persons. Of the 60, there were remains of 40 persons twelve or younger, two-thirds of the remains.

Pilgrims traveled in groups for protection from highway robbers or even Samaritans; a missing child could be in serious jeopardy. More than half of families during child-rearing years had lost one or both parents. In this episode, Jesus is fortunate to have both parents alive and to have been well-cared for reaching the age of 12 – no mean accomplishment for Mary and Joseph.

No wonder then that when Joseph and Mary found Jesus, they were “utterly astonished.” Mary chides: “Child, why have you treated us like this? Look, your father and I have been terribly worried and searching for you?” Mary expresses the appropriate concerns of any parent in this situation. The text says nothing about the joy of Mary and Joseph on finding Jesus; we have to interpret any such joy based on human experiences.

The artist Louis Glanzman has a rendition of Martha of Bethany, Lazarus’ sister, as a first-century Jewish woman standing with her hands on her hips in a confrontational stance. I use this picture in class when discussing the missing Jesus and also in presentations on Mary and Joseph of Nazareth.