Commemorative Ceremony for 150th Anniversary of First Patients to Kalaupapa 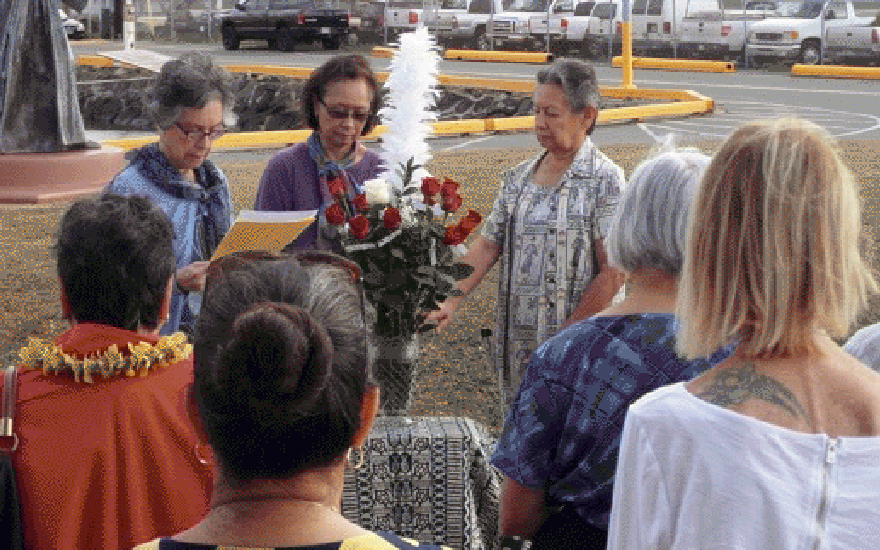 It is written throughout Holy Scripture that out of pain and suffering comes healing. Although at times it may seem that there is no way out of pain, and it sometimes may take years, God never fails to carry us through sorrow and bring peace.

On Jan. 6, 2016, throughout Hawaii, this Gospel message came to light. Prayer services were held on each island to commemorate the 150th anniversary of the first 12 patients with Hansen’s disease who were sent to Kalaupapa on the island of Molokai. Eventually, St. Marianne Cope would bring several of her fellow Sisters of St. Francis to minister here.

The Sisters of St. Francis of the Neumann Communities participated in a prayer service beside the statue of St. Marianne at Kewalo Basin Park on the island of Oahu. Sisters brought a dozen red roses, one for each of the 12 patients. As each patient’s name was read, a red rose was added to a vase. A final white rose representing the additional 8,000 people who would be sent to Kalaupapa was then added to the bouquet. At the end of the ceremony, the vase was left at the foot of the statue. In addition, Sister Caryn Crook took part in a ritual of scattering flower pedals in the ocean and watching them float toward the island of Molokai.

Participants agreed that sharing stories was the best part of the service. Patients who lived in Kalaupapa spoke of having to leave their families knowing they would never see them again. They also shared their hope-filled experiences with the nurses, social workers and the sisters who cared for them.

Although Kalaupapa was a place of isolation, pain and suffering, the stories showed that there was another side of Kalaupapa: light, love, community, and support. It took years to achieve this, but the hard work paid off and now when we visit Kalaupapa, we can feel its sacredness. Family members arrive at Kalaupapa today to stand at the graves of their loved ones and find peace and healing.

Our world today sees so much suffering: floods, droughts, wars, and drugs. All contribute to the surge in refugees fleeing their homelands for survival. Like the patients at Kalaupapa, families are ripped apart and many know that they will never see their loved ones again.

We hear on the news the appalling conditions the refugees face. Reflecting upon the stories of how St. Marianne and the sisters created a community filled with love and dignity in a place of isolation brought a deeper understanding of the importance of relationship.

Just as people need food and shelter to survive, they also need to feel worthy of love and attention. This objective of St. Marianne transformed a lawless place into a solid community where people supported one another through the tough times of separation and illness.