Irish Dancers Perform for Sisters at the Franciscan Villa

On March 11, a group of 25 Irish step dancers brought a touch of Ireland to sisters at the Franciscan Villa in Syracuse, New York. The young dancers from Francis Academy of Irish Dance performed both soft and hard shoe dances.

Following their performance, the girls walked around and wished each sister a happy St. Patrick’s Day.

The celebration was very enjoyable and proved that you don’t have to be Irish to enjoy and appreciate the hard work and talent of these young people. 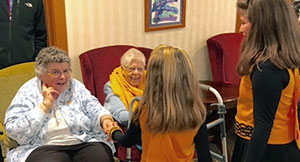 The day dawned bright and sunny on Saturday, March 12. A bit chilly, but that didn’t deter six sisters from Mount Alvernia together with nearly 50 other Catholic sisters from Pittsburgh who took part in the St. Patrick’s Day Parade.

As sisters waited aboard two Molly’s Trolleys for the parade to begin, group photos were taken. It was like “old-home week” as sisters greeted others whom they see only once a year – at this parade.

When the parade began, some sisters chose to walk and distribute candy to children, as well as bracelets provided by the Pittsburgh Religious Vocations Council. About to 200,000 people lined the streets and cheered their favorite units. Sisters were excited to hear people from the crowd call out, “Mount Alvernia” or “Sisters of St. Francis” or even a particular sister by name.

St. Patrick himself also joined the marchers and greeted crowds along the way. And, did you know that Santa Claus wears a green outfit for St. Patrick’s Day?

The Pittsburgh St. Patrick’s Day Parade is known to be the second largest in the country. With the beautiful weather on Saturday, it may have been the biggest this year. 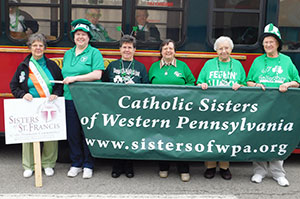 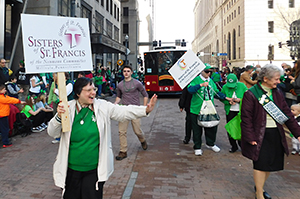