Apostle of the Apostles: St. Mary of Magdala 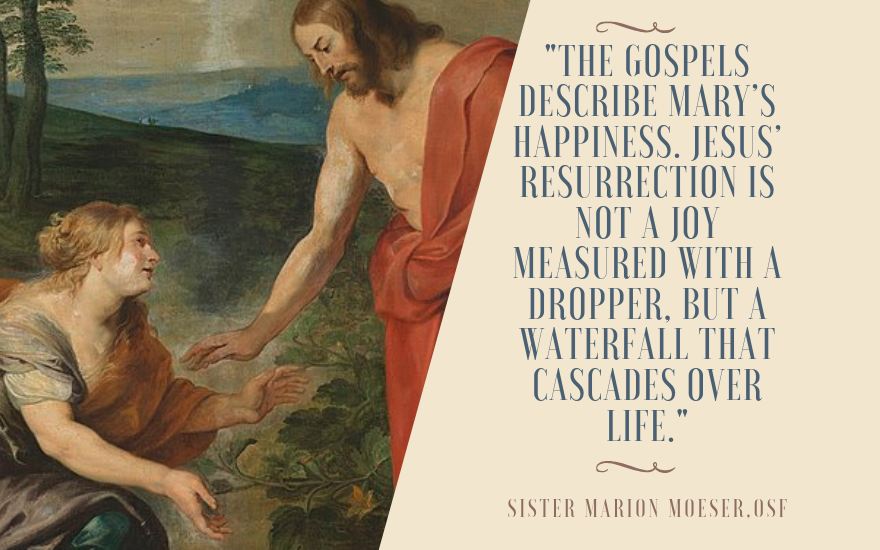 Two years ago, the Vatican raised the status of St. Mary Magdalene — her liturgical memorial is now a liturgical feast and she is now characterized as “the apostle of the apostles.”  Historical traditions presented her as a repentant prostitute but is this true?  Is there a gospel account of her conversion? I first heard, “No,” to the above questions in 1983 during a scripture course on the Gospel of Mark, and sure enough, there is no such description of Magdalene.

The description of Magdalene as a prostitute is an interpretation of Luke 8:2 which says that seven demons had been cast out of her and that she followed and served Jesus out of her own funds. Her depiction as a sinner comes from equating demon possession with being a sinner; however, that same equation isn’t made elsewhere in scripture (Mark 5:1-20).  So we cannot picture Mary Magdalene, as a sinner with any assurance, let alone as a prostitute.

Thomas Aquinas writes of her as “Apostle to the Apostles,” and rightly so.  Magdalene is present at the crucifixion, death, burial, and empty tomb of Jesus. The Synoptic Gospels puts her among the women who are sent to tell the apostles and disciples that Jesus has been raised. To be “sent” is to be an apostle, and to be sent to announce good news is to be an evangelist. Today, Mary Magdalene is most often highlighted as apostle and evangelist.

Do not overlook that Mary meets the Risen Christ as John’s gospel records. Mary finds the stone rolled back, the tomb empty and runs to tell Peter and the beloved disciple. She returns and weeps outside the tomb; looking in she sees two angels who ask why she is weeping. Then she sees the “gardener” who also asks her why she is weeping. Mary tells him and when he calls her “Mary,” she recognizes him as the Risen Jesus.  Jesus tells her not to hold him but to go to “my brothers” and announce that he is ascending to “my Father.” Reflections on this scene often deal with recognizing the Risen Lord or what the command to “not hold him” means. One can easily miss what the scene says of Christ, but Pope Francis offers this reflection:

The Gospels tell of Magdalene’s second visit to Jesus’ sepulchre. She was stubborn! She went, she returned … because she was not convinced! This time her step is slow and very heavy. Mary suffers twice as much: first for the death of Jesus, and then for the inexplicable disappearance of his body. …

As she is stooping near the tomb, her eyes filled with tears, God surprises her in the most unexpected way. … How nice it is to think that the first apparition of the Risen One, according to the Gospels, took place in such a personal way! To think that there is someone who knows us, who sees our suffering and disappointment, who is moved with us and calls us by name. …The Gospels describe Mary’s happiness. Jesus’ Resurrection is not a joy measured with a dropper, but a waterfall that cascades over life. Christian life is not woven of soft joys, but of waves engulfing everything. You too, try to imagine, right now, with the baggage of disappointments and failures that each of us carries in our heart, that there is a God close to us who calls us by name and says to us: ‘Rise, stop weeping, for I have come to free you!” (General Audience 5.17.17)