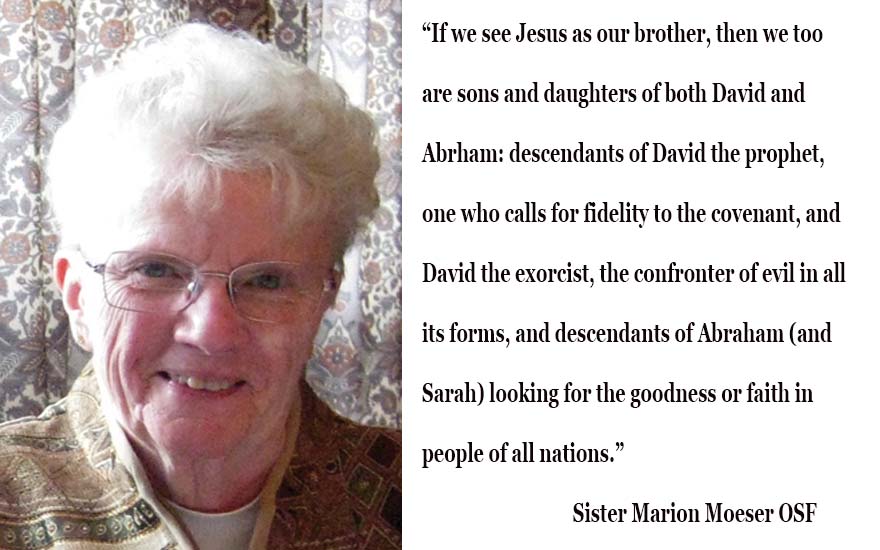 “The book of the genealogy of Jesus, Christ, son of David, son of Abraham,” thus Matthew begins his gospel (1:1). This tongue-twister list of biblical names is only read on a weekday in Advent; the most recent writing on the list focused on the unusual inclusion of five women—Tamar, Rahab, Ruth, the wife of Uriah (Bathsheba) and Mary. However, since verse 1 presents the overall image of Jesus the Messiah (Christ) in Matthew, I will focus my thoughts here on “son of David” and “son of Abraham” as images applied of Jesus.

Even though the list begins with Abraham, it is clear that the emphasis is on Jesus’ Davidic descent. Not only is there the explicit mention of David in verse 6, but the ending mentions 14 patriarchs from Abraham to David, 14 from David to the Exile, and 14 from the Exile to the Messiah (1:17). In the ancient world, a person could have a “number” determined by an addition process called “gematria.” In Greek and Jewish circles, numerals were not used, but letters of the alphabet were used as numerals. Also, there were no vowels in Hebrew. “David” would be “dvd.” “d” was four and “v” was six, adding up the numerical value of the letters gives David’s number as 14.

At the time of Jesus, “Son of David” was a messianic name for the Jewish expectation of a Messiah as a new king. But other Jewish writing of this time reflected two other characteristics of David as Messiah, that of prophet and that of exorcist. David is considered to be the author of The Psalms and some of them contained hopes for a future Messiah, so David was thought to be a prophet. Additionally, Matthew cites Jesus as introducing a quotation from Psalm 110:1 with “David inspired by the Spirit” (22:43). David portrayed as an exorcist comes from writings found in the Dead Sea Scrolls. We find mention that David wrote four psalms for charming the demon possessed; one scroll of the Psalms from this group contains extra psalms not in our biblical book, four of these are for exorcising demons.

Finally, a word about “son of Abraham.” Matthew made a deliberate choice to start his list of Jesus’ ancestors with Abraham, since many biblical genealogies start with or go back to Adam as does Luke’s list of Jesus’ ancestors (3:23-38). One clear purpose of Matthew’s gospel was to speak to including gentiles into the Christian community, a problem in the early Church. Clearly the stories of the Magi and the Canaanite woman speak to the faith of gentiles.

In Gen 12:1-3, God promises Abraham that he would be the father of a great nation and through him all communities of the earth would be blessed. Jesus, descendant of Abraham, fulfills that promise as the Risen One when he sends his disciples “to makes disciples of all nations” and uses the covenant language, “I am with you.” I would argue that the last line of the gospel picks up, full force, the descent of Jesus from Abraham, tying in with verse 1:1.

Matthew’s gospel calls us to expand our understanding of Jesus as “son of David” and also reflect upon him as “son of Abraham.” If we see Jesus as our brother, then we too are sons and daughters of both David and Abraham: descendants of David the prophet, who calls for fidelity to the covenant, and David the exorcist, the confronter of evil in all its forms, and descendants of Abraham (and Sarah) looking for the goodness or faith in people of all nations.

PreviousWNY Jubilee Celebration
NextCNY Inspirations: It’s About How We Use Laughter