A Visit to Kalaupapa, Land of Two Saints 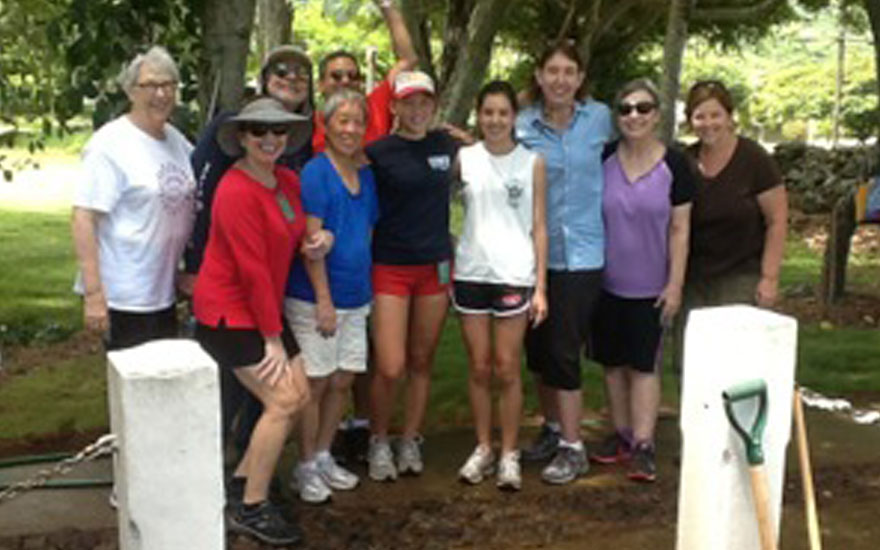 From June 10 to 13, nine parishioners from the Newman Center/Holy Spirit Parish spent time at Kalaupapa to experience life where Saint Damien and Saint Marianne ministered to the outcasts of society. The group followed the St. Damien, St. Marianne Pilgrimage Guide, developed by the Saint Damien/Saint Marianne Commission of the Diocese of Honolulu.

The guide, with its scripture readings, historical information, reflection and prayers, leads the group in a spiritual experience. During the three day visit, the parishioners learned their way around the surrounding area at the Visitors quarters, took a tour of Bishop Home. Led by Sister Theresa Chow, the tour included a biography of Saint Marianne, history of Bishop Home and a recognition of all the sisters who ministered to the women and girls since the arrival of Saint Marianne in 1888. That was followed by a drive to Damien’s domain of Kalawao, where they lunched at that truly magnificent place of natural beauty imbued with much sadness, sorrow and pain in the early years.

In the future there will be a monument in the area of the Old Baldwin Home in Kalawao in memory of all those who have died at the peninsula.

Their second day at the settlement was a Retreat Day, time for reflection, recollection, contemplation and quiet time with the Lord, all guided by Spiritual Director June Naughton.

While that may sound like all work and no play, the group did have fun, swimming, sight-seeing, star gazing, attending cook outs and entertainment, taking walks, snoozing and relaxing. They developed a closer relationship with each other but above all, took on an inspirational study of the two Saints of Kalaupapa. Group members: Leader June Naughton, Jeff & Beth Freitas with their two daughters Anna and Mari, who performed the hula for all, Ana and Armando Lopez, Donna Christle, and Rosemary Casey.