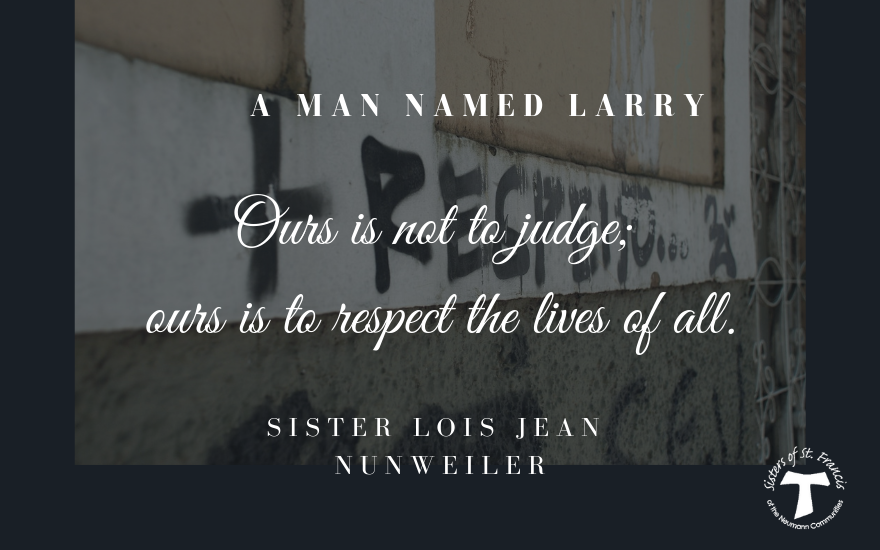 The Town of Amherst and the Village of Williamsville in western New York are somewhat selective as to what is acceptable or not acceptable “in our backyard.”  It wasn’t always that way. The early history of Williamsville is one of settlers who made their homes in this area and developed their futures from the earth in very humble beginnings. Over time things changed.

Thursday, January 31 the man named Larry was found dead in a local bus shelter just yards away from his makeshift camp in a patch of trees along Main Street in Williamsville.

Larry was well-known in the Williamsville area. He had a weather-beaten face and a lock of hair that seemed to form one long tail that reached the ground. I often wondered if he would use this to wrap around himself to keep warm. We saw him often and noted how “out of place” Larry appeared in such a “respectable” community. He walked Main Street and was often seen at the McDonald’s at Main and Union or Tim Horton’s coffee shop at the Walker Center or at TOPS Market at the corner of Union and Forest.

At some point from Wednesday into Thursday of a week noted by extreme cold, Larry died of hypothermia. As news reports broke about a homeless man found dead in the bus shelter, I would bet that everyone’s thoughts turned to Larry – I know my mind did.

Larry touched the lives of everyone in this area.

He was from St. Gerard’s Parish. He attended Bishop Turner High School in Buffalo and graduated in 1967. So many people, including his family, tried again and again to get him help, to get him off the street into better conditions. But Larry chose to live life on his terms.

Larry brought out the best in people. He never demanded, never panhandled, was never rude and always accepted. He accepted the good from others – food, a warm place to sit and sleep, a cold drink and air-conditioning in warm weather.

The local newspaper featured an article about Larry with the headline: “Retired officer shocked to learn the homeless man was his old classmate.” The officer spoke of knowing Larry over the years and watching over him at a distance, not knowing that they had graduated together from Bishop Turner. It was only after he heard Larry’s last name that the officer realized who Larry was.

Larry’s story reminded me of Timothy Richardson. Timothy sat in a wheelchair outside the elevator at Fiddlers’ Green, a nursing home in Springville, New York. Our eyes met one day as I frantically tried to find my niece Connie as Alfred, her dad and my brother-in-law, took his last breaths.

Several weeks after Alfred’s death, Tim died. Tim died alone. As he was brought to St. Aloysius Church in Springville for his funeral, we wondered who was this man? With the exception of three parishioners, the church organist, Sister Alice Gilabert, myself and the priest, no one was at the funeral. As Mass began, a couple came in and sat up front. In his sermon, Father Larry used the analogy of his mother savoring every bit of cake batter when baking and how God savors every person no matter how important or seemingly unimportant.

Later, we learned that the couple at church owned a restaurant and that Timothy had worked for them. They spoke about how Father’s homily was so meaningful in relation to their careers and Tim’s working for them in the restaurant. We later found out that Tim graduated from Canisius College in Buffalo – what happened to his family or his life in-between we do not know. He died with nothing and no one. St. Aloysius Parish gave him a grave, Smith-Weismantel Funeral Directors donated their services and Sister Alice and I picked out the headstone for his grave.

We never know. There are people out there unknown to others – some choose that path, some follow that path without making an actual choice.

Ours is not to judge; ours is to respect the lives of all.

I’m not preaching – just sharing my thoughts.  Thanks for listening.

PreviousOur Lady of Lourdes, Pray for us.
NextWomen Leaders in the Early Church