A Growing Ministry: Harvesting Fresh Food for People in Need 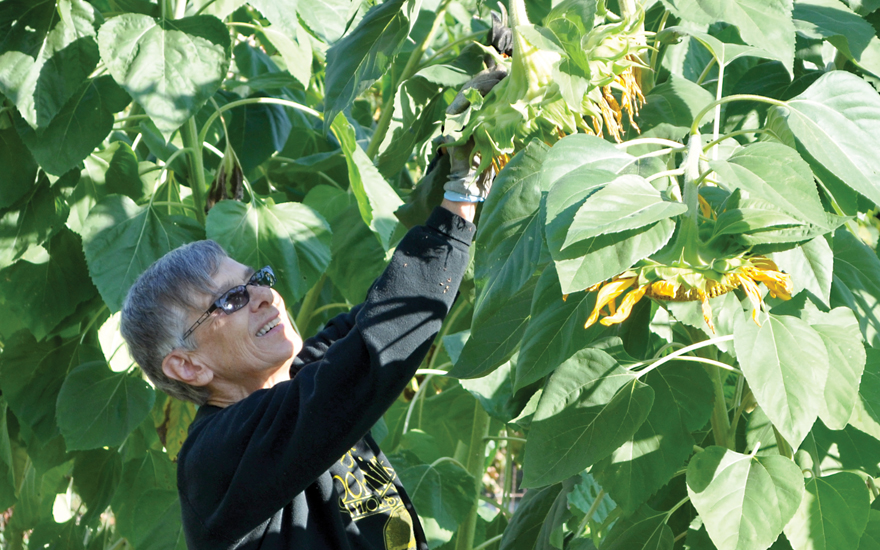 “All of us can cooperate as instruments of God for the care of creation, each according to his or her own culture, experience, involvements and talents.” – Paragraph 14, “Laudato Si”

Three years ago, Sister Anne McNulty made a snap decision about what she wanted to do for her next ministry.
“I was driving to Toronto with Sister Helen Hofmann and I saw all these empty farm fields and I just said out loud, ‘I want to be a farmer,’” she says. “I told Sister Helen I wanted to have a farm and grow vegetables to feed the poor.”

She knew little about farming, so Sister Helen suggested she spend some time at Red Hill Farm. Owned by the Sisters of St. Francis in Philadelphia, Pennsylvania, the farm provides for 120 people who own shares in the project as well as the sisters.

The work-study program she did at the six-acre farm was everything Sister Anne had hoped for — and more. “It was like a whole new world opened up,” she said. “In the morning I would be up early and open the gates to the farm. It would be just me, the crickets, sunshine and church bells — heaven!”

It also was hard work. Sister Anne learned farming and irrigation methods and the importance of proper planning, including such details as which tasks to perform before the day becomes too hot and the sequence for most effective plant harvesting.

Back in Syracuse, New York and filled with agricultural enthusiasm, Sister Anne first looked to start her farm project at the congregation’s nature center at Alverna Heights, but the fencing needed to protect crops from the wildlife made the cost prohibitive. She opted for a “mini-farm” behind the home of several of the sisters and planted several varieties of potatoes and tomatoes, squash, radishes, beets, lettuce and beans as well as lavender, basil, oregano, rosemary, mint and scallions.

“I had thought to feed the poor and homeless, but the homeless don’t have refrigerators or places to cook,” she says. “And there are people in need where we don’t imagine — the nearby family that struggles to make ends meet each month; the construction workers in the house next door. Many people in need are right in our own backyard.”

Sister Anne sent bags of goods to an inner-city parish with a large immigrant population; in return, they sent her gently used garden tools. In addition, Liz Haahr, menu coordinator at Francis House stopped by several times a week to select items to feed the terminally ill being cared for there. Sister Anne brought fresh vegetables to the food pantry which the sisters operate in Syracuse.

“And it made me happy,” she says. “It was creation centered and life-giving.”

She readily shares the credit with the many sisters who helped plant, water and weed and offers thanks and prayers for her neighbor on the other side of the fence — a native of Italy who shared with her the knowledge he gained from years of gardening — and the figs from his prize trees.

Sister Anne isn’t sure the current location is the right place, but she would definitely like to cultivate a larger parcel in the spring.

“If it could be expanded to meet the needs of the poor, that would be my dream,” she says.